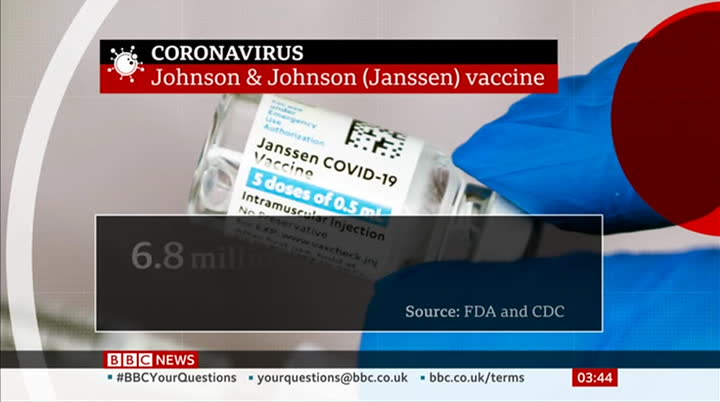 clots in the brain out of 6.8 million doses. so less than one case per million people immunised. all were women under 50, one of them died and the one is critically ill. that issue of the possible links between very rare blood clots and vaccine such as those produced byjohnson &johnson and astrazeneca is an acutely difficult one forjournalists and rouses strong emotions in the audience. some viewers feel the bbc has made too much of the possible connection. and a similar concern after seeing this story online a couple of weeks ago.
3:46 am 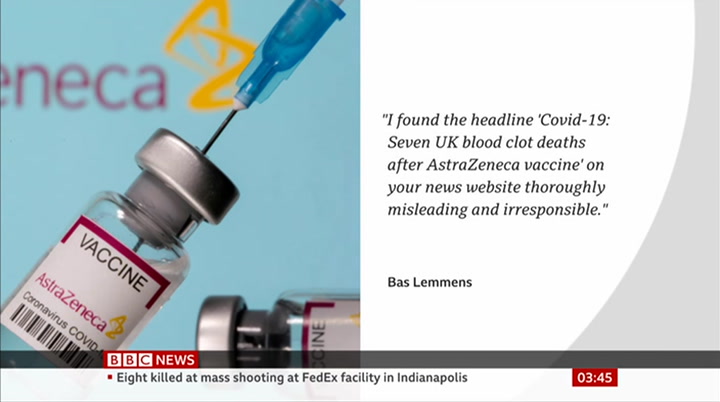 but others find fault in the opposite direction. carrie marsh wasn't accusing bbc news of being on the wrong side of the fence but wondered...
3:47 am 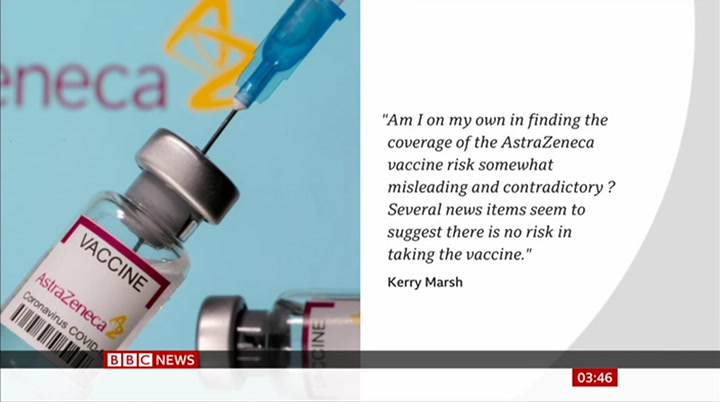 well, i'mjoined now via webcam by fergus wells who is the bbc�*s medical editor. thank you for coming on newswatch. let's start with the issue of different vaccines, differing regulatory authorities around the world and then changing reports of possible risks. how do you decide what to report and when? i've been reporting risk for a long time now. and it's a tricky area. i've always made it clear that no medicine, whether it's aspirin or vaccines have they all carry a certain level of risk. we have to balance that against the benefit. and when stories began to emerge both in the uk and in europe, in particular about the astrazeneca, the oxford astrazeneca vaccine and when they are reputable reports based on the safety data,
3:48 am 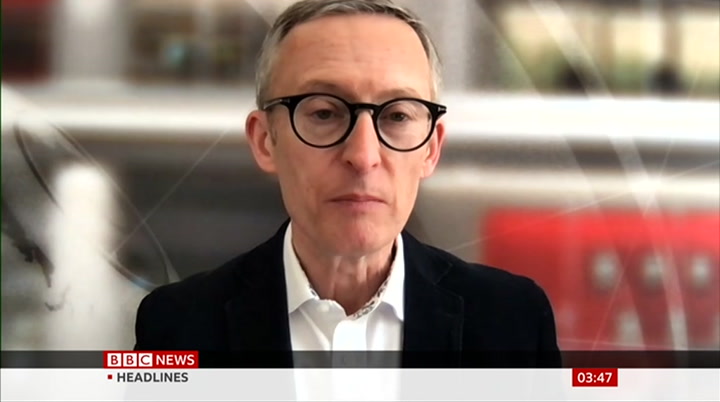 the safety monitoring data we have a duty to report that. but also to set it into context. i really think the viewers and listeners and readers don't expect our reporting to simply be black and white. there are shades there. and it's about presenting the balance of the risk against the benefits. are you worried at all that some viewers feel that the bbc might be feeding vaccine hesitancy? well, i hope not. i can remember a couple of weeks ago it was on the six and ten o'clock news when the sort of, definitive or the latest raft of reports came out about the link between clots and between the vaccine.
3:49 am 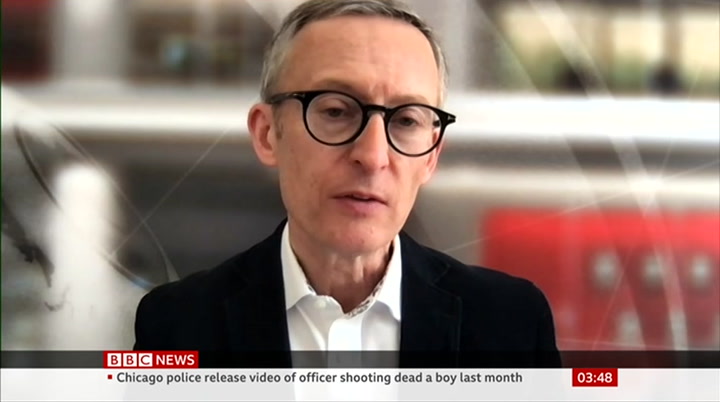 and the vaccine advisory group suggested that people under 30 here get an alternative jab. and it was important to present any risk within context. i knew that that's what was coming out. and that morning i contacted a professor at the wynton group in cambridge who is absolute world expert on communicating at risk. and actually when the government then presented its data i noticed that they had also asked him to look at the risk versus benefit. just to give you the context, for the group under 30 who had the highest potential risk of a clot, it's about one in 90,000 or one and 100,000 people who have the astrazeneca vaccine might get a clot. which is roughly the same risk as people in their 20s run every three months from dying in a road accident. obviously, if you're one of those people that has the clot then that can potentially be life—changing
3:50 am 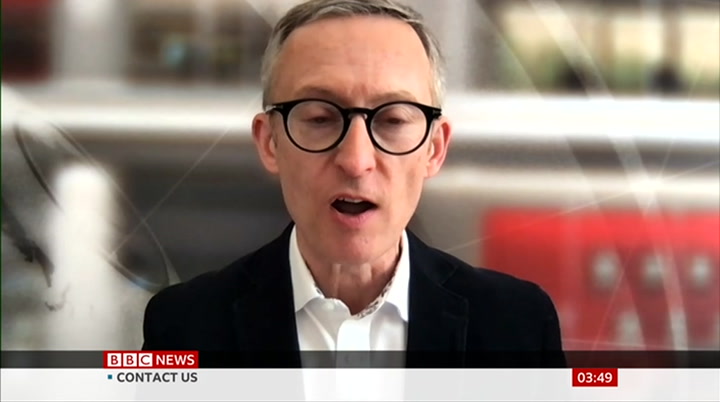 but i think it sets it in context. fergus, we know that many people don't really read much beyond the headline. and so with the best will in the world is there a danger that the bbc will be oversimplifying the complex issue in its report in? i don't think so because people do look beyond the headlines. there has been saturation coverage of the pandemic. and which some may feel that we've given too much coverage to the coronavirus pandemic. and so i think that anybody who really wants to look at the potential risk and given that 32 million people have had at least one dose of vaccine, i think people are prepared to go beyond simply a top—line headline. and even in our headlines we had won last week and online saying what are the risk versus the benefits? we tried to be quite clear.
3:51 am 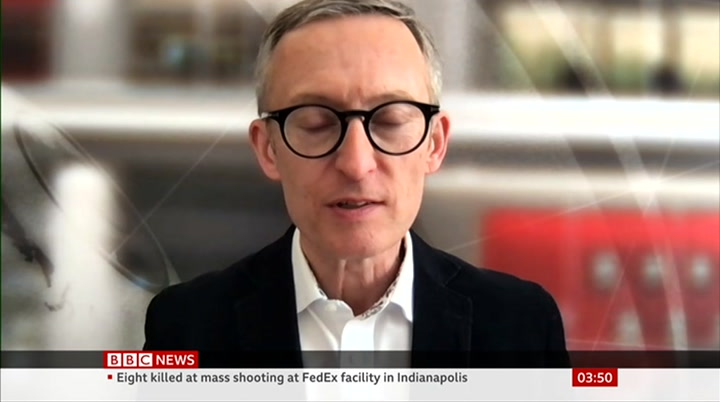 the bbc is of course a public service broadcaster. does the governments nhs vaccine drive put you in an awkward position and as some viewers feel the bbc is doing the governments job for it. well, yeah. that's an interesting comment. i think it's pretty clear that the nhs immunisation programme for covid has been a huge success here. and it's been a key part and will play in absolutely crucial role in bringing the outbreak under control in the uk. as a whole it's hard to knock that. when you got the detail, if there are problems with any vaccines or problems with supplies or people are not getting
3:52 am 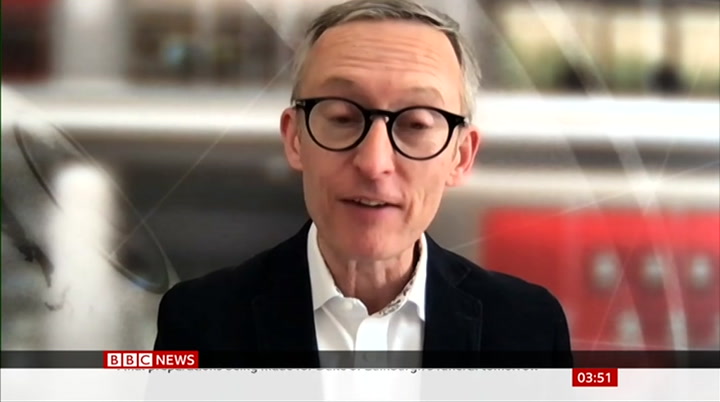 there vaccine then we will absolutely report that. the fact that the immunisation programme is going very well, that means the coverage is generally positive. but if it was going badly, i can tell you, we would be highlighting that to. now in your career you've covered mers and sars. we are a year now into covid—i9. we've got all these new variants of a still emerging, how would you assess where things are in the pandemic and where the story might go? crystal ball gazing, we should give a big health warning on that. whatever him about to say now. i'm optimistic that with immunisation that we in the uk are going to be in a far better place within the next couple of months towards the summer, a transformation in a much more near normal life that we've had in the last 18 months. but globally, there is still
3:53 am 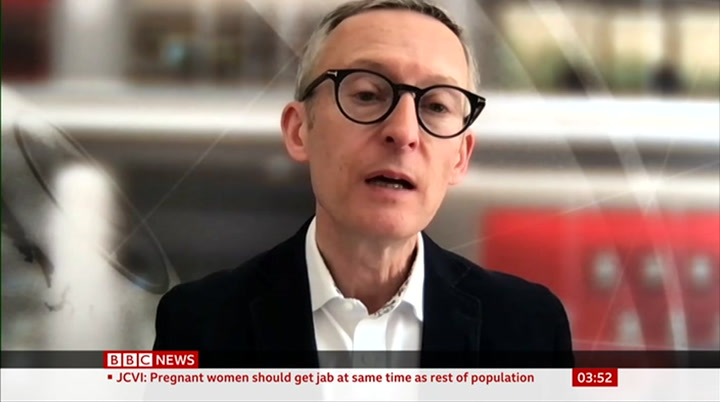 a huge, hugejob to do. fergus walsh, thank you so much. finally, bbc 0ne�*s sunday night drama a line of duty has been a big ratings hit and is even got a mention in this week's prime minister's questions. but many viewers have been confused by some of the acronyms used by characters in the latest series. the fast—paced action pack show follows the work of aci2, the unit investigating corruption within the police itself. and bandies aboutjargon such as 0cg or organised crime group. and covert intelligent sores. we've always thought of ourselves on newswatch is a sort of ac 12 equivalent. here to police bbc
3:54 am 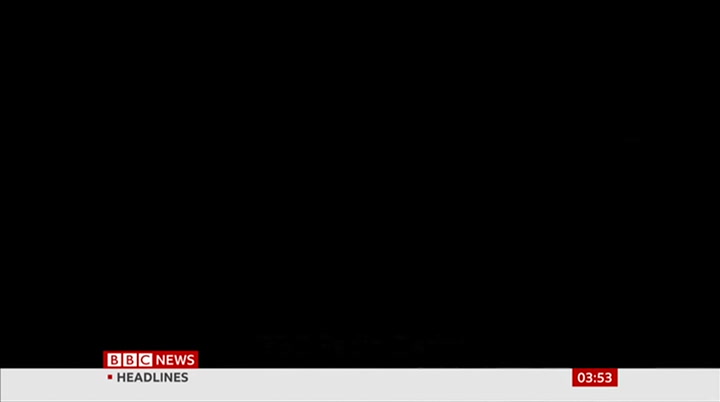 news from the inside. but our colleagues at radio derby also saw a parallel with the work they do and made this video. radio derby told us they were inspired to make that spoof in part to dispel the myth that local radio stations take themselves too seriously. beyond that they weren't prepared to answer any questions without a lawyer present. if you'd like us to expose what you see as wrongdoing on the part of bbc news or to highlight what you like about the output then please e—mail:
3:55 am 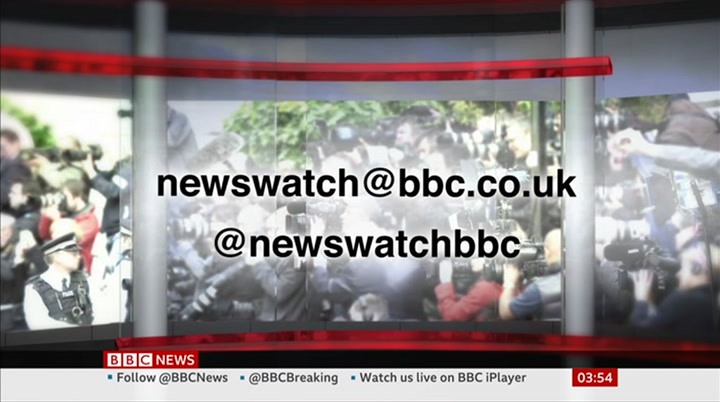 or post your thoughts on twitter @ newswatch bbc. you can call us: and do have a look at our website for previous interviews. that's all from us we will be back to hear your thoughts about bbc news coverage again next week. goodbye. hello there. friday was another fine spring day, and we're going to continue with this dry theme throughout the weekend and perhaps into monday as well. some chilly mornings, yes, but it's not going to be quite as cold overnight nor during the day as it has been of late. we had some patchy cloud bubble up on friday, but the thicker cloud was towards the north—west of the uk and that brought rain in the north—west of scotland. that is fading away, mind you. the next weather system is going to be hanging out in the atlantic and we'll be dominated by high pressure that
3:56 am 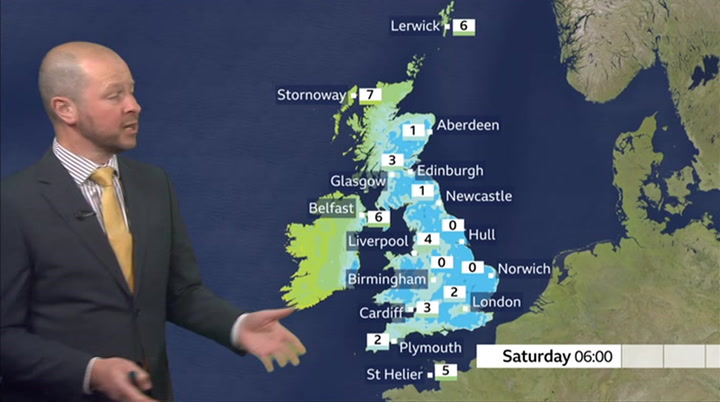 stretches down from scandinavia. it will be another cold start. a frost across parts of england and wales and eastern parts of scotland. a bit milder for north—west scotland and northern ireland, where we've got more of a breeze and some cloud for awhile. sunny start for many, any mist and fog soon lifting. some patchy cloud will bubble up here and there, but i think it will be a sunnier day on saturday through the midlands and eastern parts of england. and for much of the country temperatures will be a degree or two higher than they were doing yesterday, so making 14 to 15 degrees maybe a little bit more widely. into the evening and overnight, those temperatures will fall away quickly as skies start to clear, except in northern ireland and western scotland, where the weather fronts in the atlantic are moving in here to bring patchy rain and they keep the temperatures up. 0therwise some patchy frost, but not as cold as it has been that weather front, then, hanging around out in the north—west bringing a bit of a change in the weather for some spots of scotland and northern but for england and wales, it remains fine and dry. it looks like it'll be cloudy with patchy and light rain
3:57 am 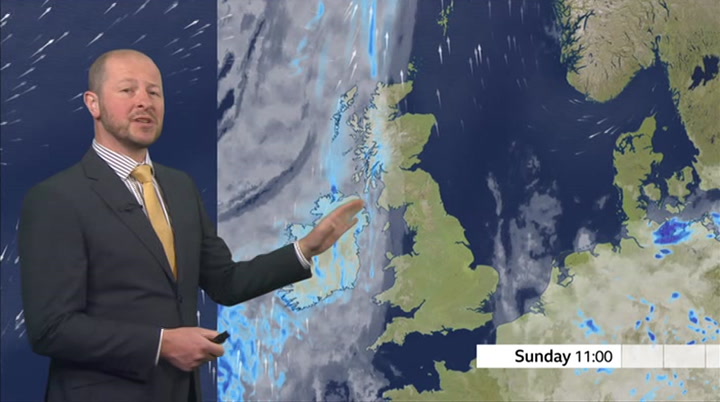 for northern ireland and now it is more likely to be damp across western scotland. further east, it's going to be dry and bright with sunshine, and sunshine for england and wales and patchy cloud for wales and the south—west, and sunshine a bit hazy in eastern parts of england. through the midlands and eastern england, temperatures looking to reach 14 or 15 degrees, so it is warming up for these areas in particular. into monday, this rainjust doesn't want to move in across the uk. it's going to be sitting away from scotland so it looks dry here on monday. there'll be more sunshine across england and wales as well and those temperatures continuing to rise — up to around 16 or even 17 degrees, so it's warming up at long last. however, whilst we might see a little bit of rain coming in on tuesday into early wednesday, the winds then turn northerly by midweek and it gets colder again.
3:58 am 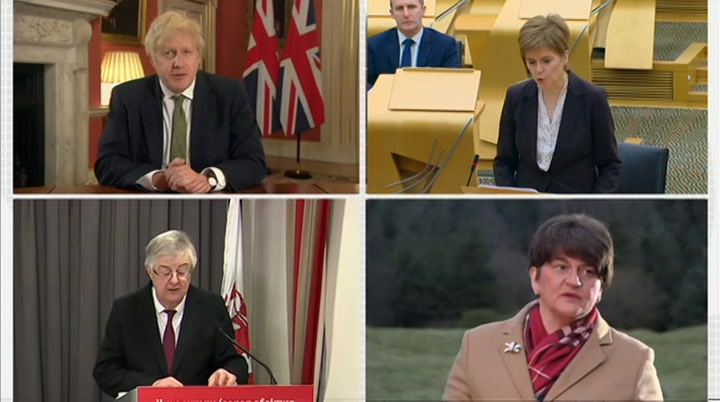 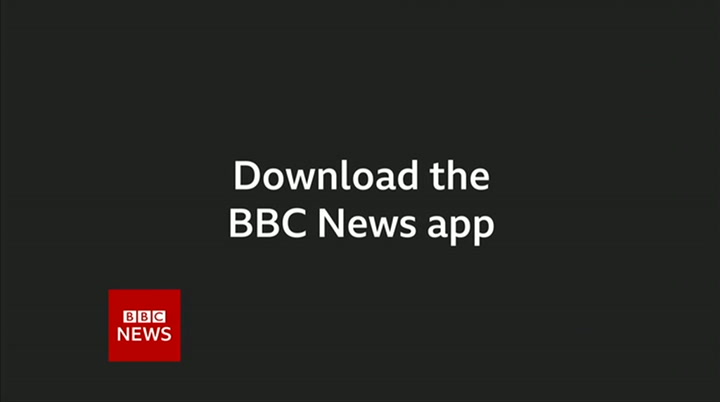 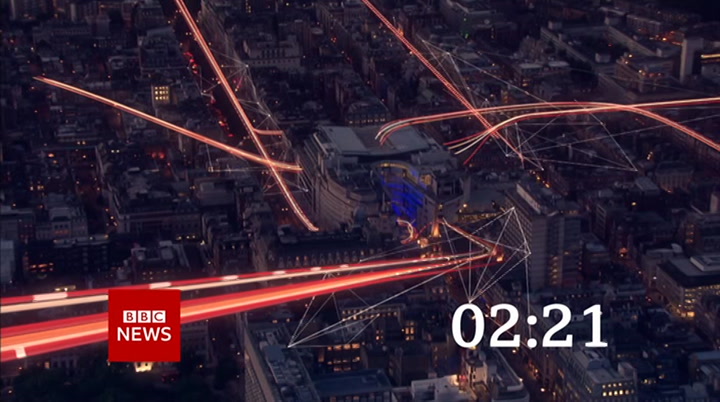 welcome to bbc news. i'm lewis vaughan jones. our top stories: final preparations for the funeral of the duke of edinburgh — a ceremony partly planned by the duke himself. we have a special report from ukraine where tensions build — russian troops gather on the border. the diplomatic row between russia and the us intensifies: moscow orders ten american diplomats to pack up and leave. a weekend curfew comes into force in the indian capital delhi, as coronavirus cases rise sharply in the city and across the country. the british actor helen mccrory — best known for her roles in the tv series peaky blinders and three harry potter films — has died of cancer at the age of 52.
left
right
disc Borrow a DVD of this show DVD
tv

Viewers' comments about BBC News coverage, with Samira Ahmed. This episode, has the BBC got the balance right in reporting the potential risks of taking a Covid vaccine?