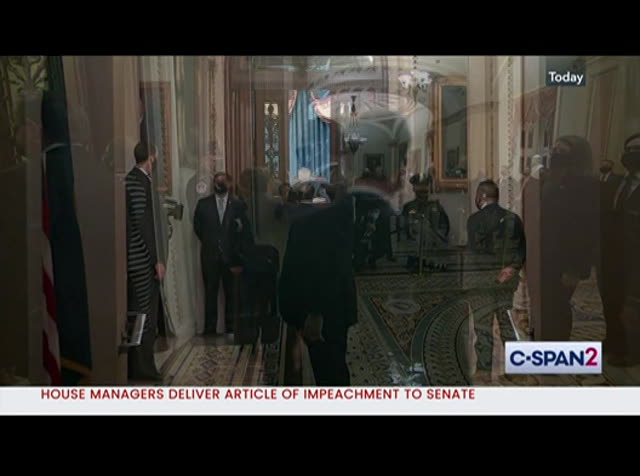 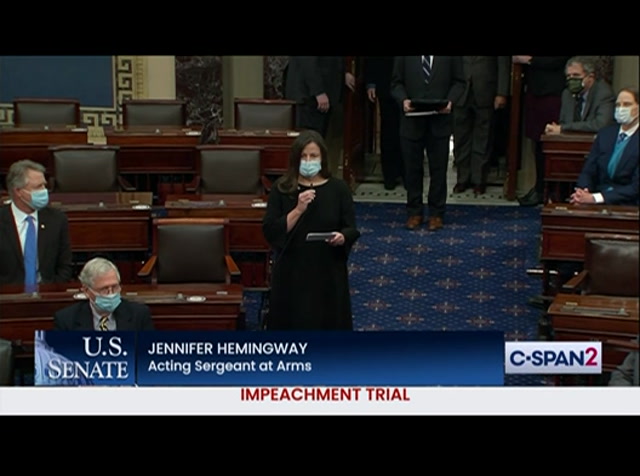 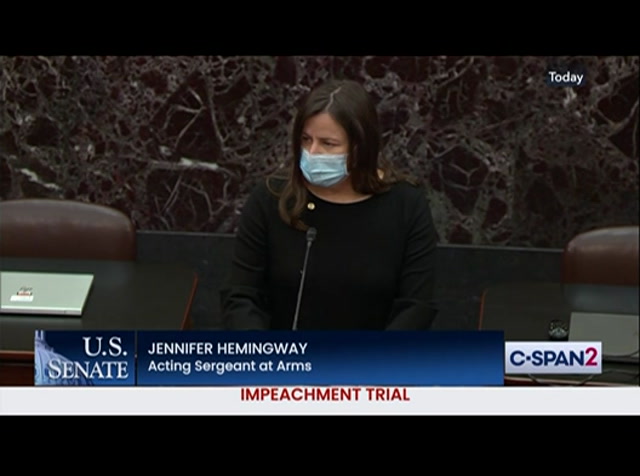 >> here he all persons are commanded to keep silent on pain of imprisonment while the house of representatives is exhibiting to the senate of the united states an article of impeachment against donald john trump, former president of the united states. >> the managers on the part of the house will proceed.
11:02 pm 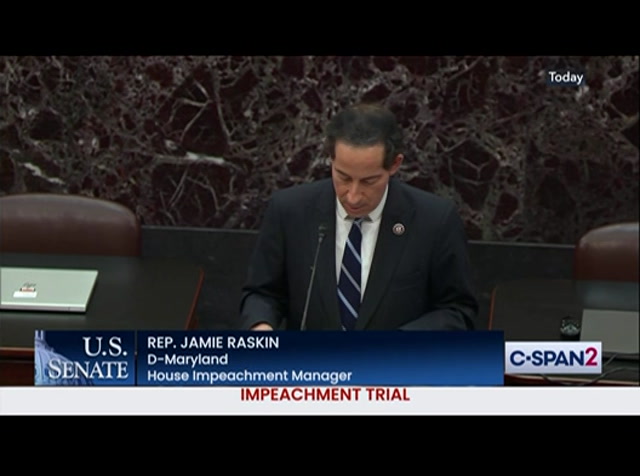 mr. president, the managers and part of the house of representatives are here and present and ready to present the articles of impeachment which has been preferred against donald john trump, former president of the united states. the house adopted the followinge resolution which with the permission of the senate i will read. house resolution 40 and house of representatives united states january 13th 2021 result mr. raskin, mr. castro of texas, mr. spore well, mr. lu, ms. plaskett and ms. dean are appointed managers to conduct the impeachment trial against donald trump. the message sent to the senate to inform the senate of the appointment and the manager may inco connection with the preparation and conduct of the trial exhibit the article of impeachment to the senate and
11:03 pm 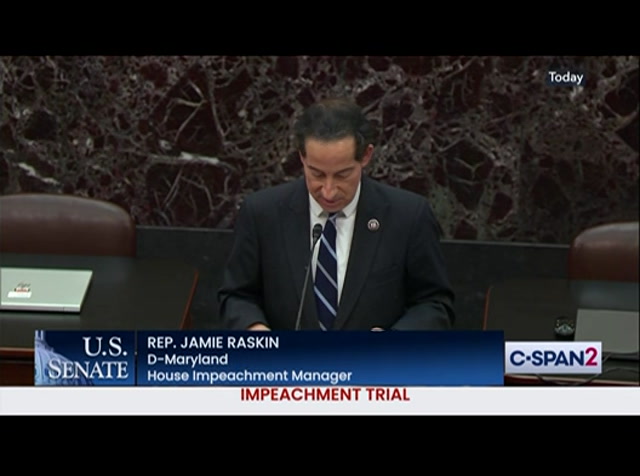 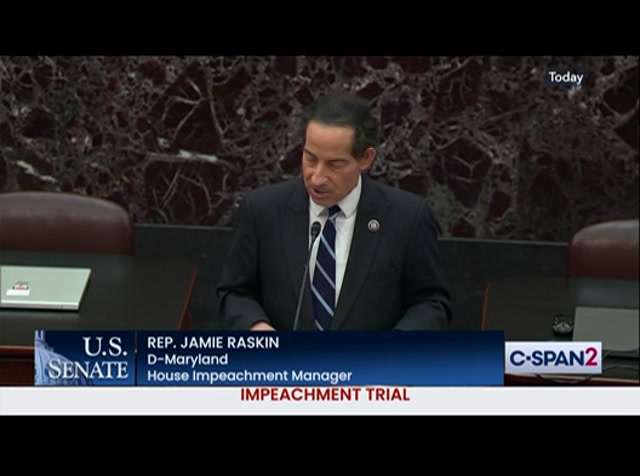 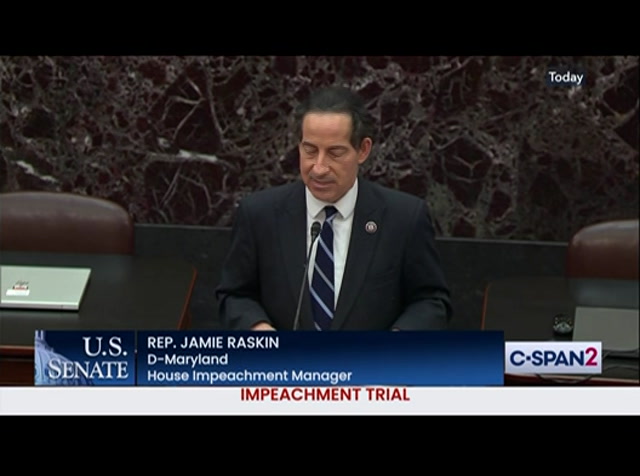 ability preserve, protect and defend the constitution of the united states and in violation of his constitutional duty to take care that the laws be faithfully executed, donald john trump engaged in high crimes and misdemeanors by inciting violence against the government of the united states in that on january 6th, 2021 pursuant to the 12 amendment to the constitution of the united states, the vice president of the united states, the house of representatives and the senate met at the capitol for a joint session of congress to count the votes of the electoral college. college.in the months precedinge joint session, president trump repeatedly issued false statements asserting that the presidential election results were the product of widespread fraud and should not be accepted by the american people or certified by state or federal officials. shortly before the joint session commenced, president trump addressed a crowd at washington,
11:06 pm 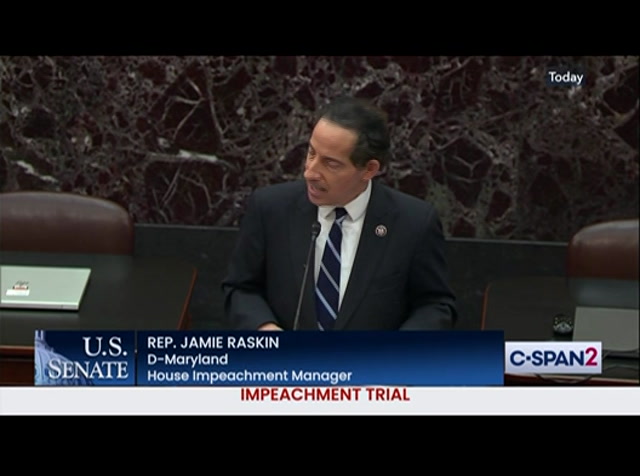 d.c. and he reiterated false claims that we won this election and we won it by a landslide. he also made statements that in context and encouraged and foreseeably resulted in the lawless action at the capital such as if you don't fight like hell, you are not going to have a country anymore. thus incited by trump, members of the crowd addressed in an attempt to among other intentions interfere in the solemn constitutional duty to certify the results of the 2020 presidential election unlawfully breached and vandalized the capital, injured and killed law enforcement personnel, members of congress, the vice president and congressional personnel and engaged in other violent deadly destructive and seditious acts. the conduct followed his efforts to subvert and obstruct the
11:07 pm 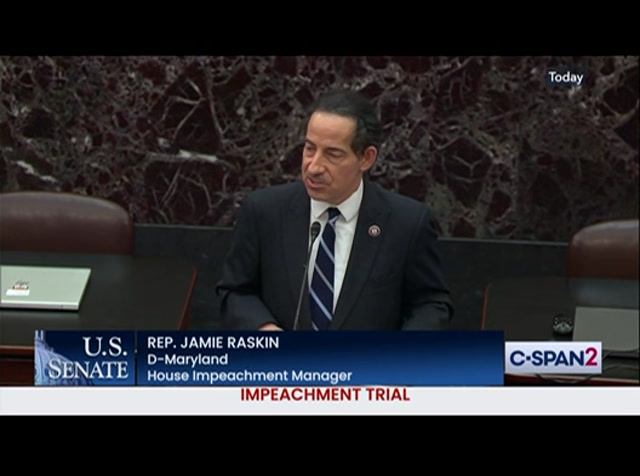 certification of the results of the 2020 presidential election and those included a phone call on january 2nd, 2021 during which president trump urged the secretary of state of georgia to find enough votes to overturn the georgia presidential election results and threaten the secretary if he failed to do so. in all this, president trump briefly endangered the security of the united states and its institutions of government. he threatened the integrity of the democratic system, interfered in the peaceful transition of power and imperiled a coequal branch of government. he thereby betrayed his trust as president to the manifest injury of the people of the united states, wherefore, donald john trump by such conduct has demonstrated that he will remain a threat to national security, democracy, and the constitution
11:08 pm 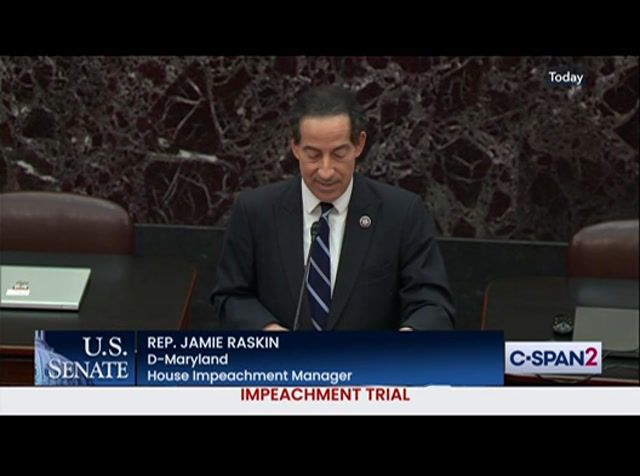 if allowed to remain in office and act in a manner that is incompatible with self-governance and the rule of law. donald john trump organs impeachment and trial, removal from office and disqualification to hold and enjoy any office of honor, trust or profit under the united states. nancy pelosi, speaker of the house of representatives. mr. president, that completes the exhibition of the articles against donald john trump president of the united states at the managers request the senate a quarter for the trial and the managers now request leave to withdraw. >> thank you. the senate will duly notify the house of representatives ready to proceed with the trial. thank you.
11:09 pm 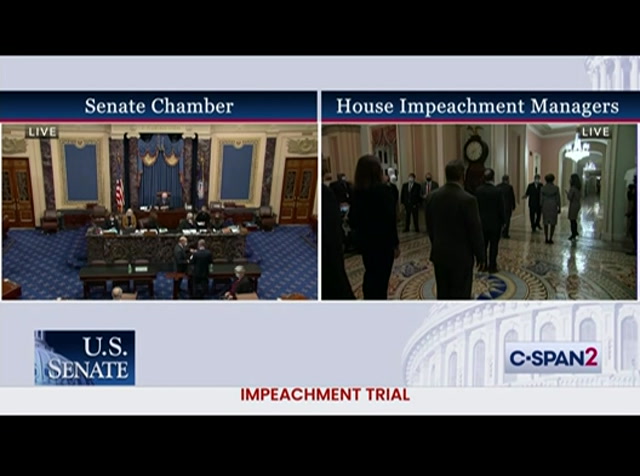 mr. president. >> the majority leader. i suggest the absence of a quorum. >> the clerk will call the role. [roll call] >> we are joined by stephen dennis, bloomberg senate reporter covering the senate side of things and that ritual of the impeachment managers are not that unfamiliar. it happened a little over a year ago in
left
right
disc Borrow a DVD of this show DVD
tv

The U.S. House delivered to the Senate the Article of Impeachment against former President Donald Trump.The Article was read on the Senate floor by lead House Impeachment Manager Rep. Jamie Raskin.