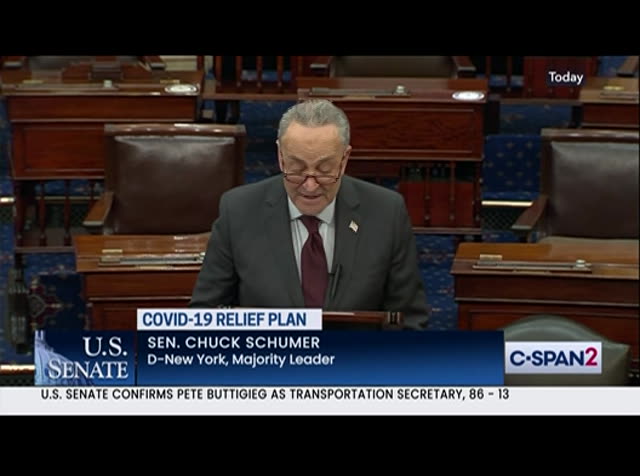 president biden, the rescue plan we begin to work on this week will lay the foundation for our country's long-awaited comeback while giving american helping hand to stay safe and stay financially secure in the meantime. i look forward to proceeding with this budget resolution and on the work of making this historic and vital rescue package a reality. so it works for the american people. i'd yield the floor and note the absence of a quorum. >> the senate will vote on alejandro mayorkas, president biden's nominee to the director of homeland security. up to this point i voted in favor of the president's key nominees and i'll have my differences kewith secretary austen, yellen and blake and on policy but they remain mainstream choices from the president. mister mayorkas is something
1:28 pm

else. he does not deserve senate confirmation to lead homeland security. his record should foreclose confirmation even to a lower post. the problem isn't experience. not exactly. mister mayorkas is all too familiarwith the levers of power that control us immigration law . the problem is when the shows and pull those levers it's for his benefit. tras a high-ranking official in the idobama administration mister mayorkas did his best to turn us citizenship and immigration services into an unethical favor factory. the democratic party royalty. governors, dnc chair, hollywood executives, a senate majority leaderfrom nevada , they all received national treatment to a degree that stunned and disturbed the obama administration's own inspector general at that department .
1:29 pm 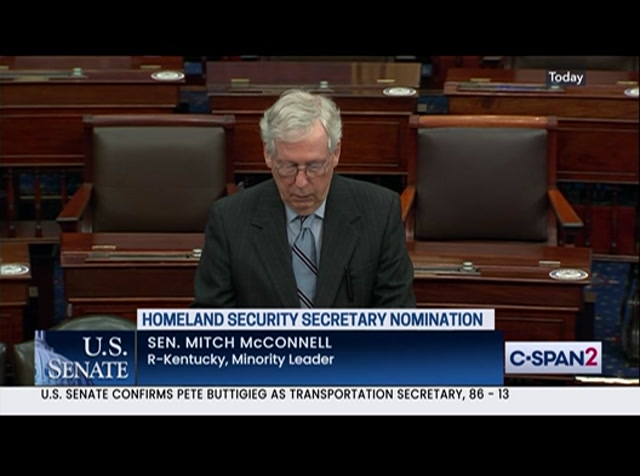 his independent report blasted the quote, appearance of favoritism and special access. we're talking about showing through green cards as political favors and intervening to overturn denials . the ig confirmed this wasn't just about speed. mister mayorkas improper influence actually changed outcomes. this wasn't the first time this nominee abused an office for political purposes. before his tenure at dhs all us attorneys the nominees had helped get a well-connected la drug kingpin onto president clinton's infamous 11 hour pardon list. the drug dealers father was a major democratic party donor. mysteriously, several notable california democrats took an extremely keen interest in the case. both mister mayorkas and yet another one of president biden's cabinet nominees,
1:30 pm 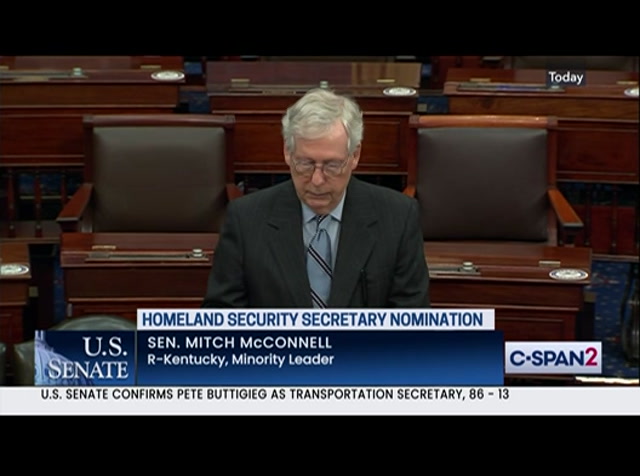 mister becerra came under scrutiny for their personal roles in the special treatment that was dished out to this donors son. and when questioned about these actions, mister mayorkas responded with false and conflicting statements including while under oath. reviews of us cis under mister mayorkas found intimidation and retaliation against employees when they were too focused on rooting out fraud instead of merely representing applications according to some of his own employees is leadership led to quote, a culture of fear and disrespect . so mister president, does this sound like somebody who deserves a promotion ? employees reported mister mayorkas viewed the people applying to live here at the agency's customers whom it was their job to please and satisfy. it said the crucial goal that defines his approach was not enforcing american laws or protecting american jobs or
1:31 pm 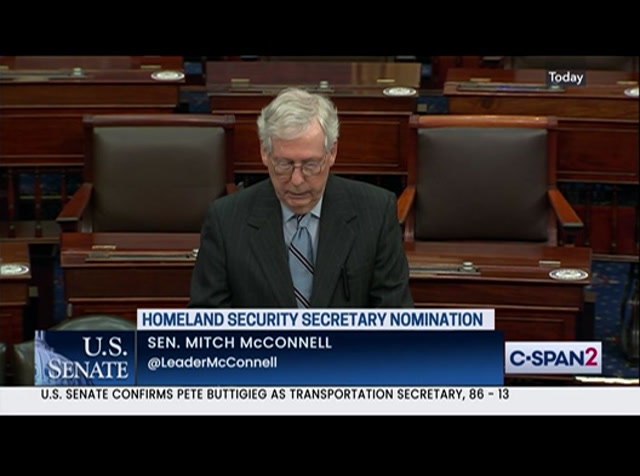 defending the american homeland but rather ensuring there were quote, zero complaints from the customers . i'll close with one observation. last week i heard the democratic leader compare the confirmation timeline for mister mayorkas versus general john kelly . general kelly unethically compromised partisan lawyer versus a retired four-star general and the senate confirmed 88 to 11 read in contrast could not be shorter sharper. for one thing i'd say secretary kelly understood that our customers first and foremost are always the american people. it's frankly remarkable that someone with this record is even up for a cabinet appointment. i'll be voting against his confirmation and urge our colleagues to do the same. now, on another matter the united states and democratic countriesaround the world are anxiously watching events in burma . i had an interesting interest
1:32 pm 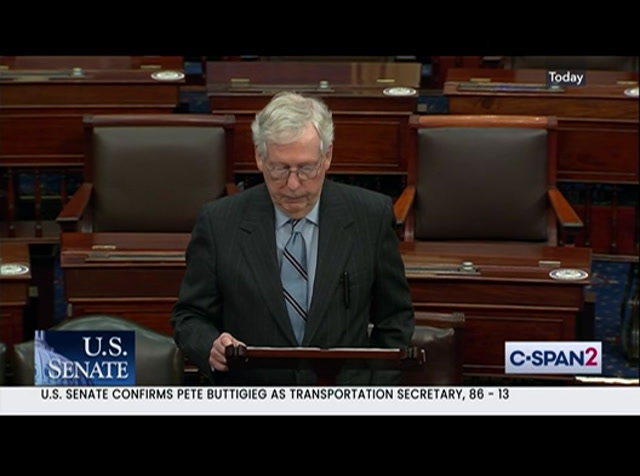 in burma for many years since the appropriations subcommittee for state and foreign operations. just last november on the floor icautiously celebrated burma's recent elections . i warned its military remained a toxic influence and an obstacle to ogdemocratic progress. t and sure enough the world was horrified over the weekend when hamas military rounded up the country's civilian political leadership and including aun sun shu chi. they feared it would lead to reforms a long imposed but they tried to simply claim control for themselves. i spoke with president biden and secretaryblinking yesterday about the situation in burma . the new administration deserves credit for approaching the situationin a way that's bipartisan and coordinated with congress . the world is watching.
1:33 pm 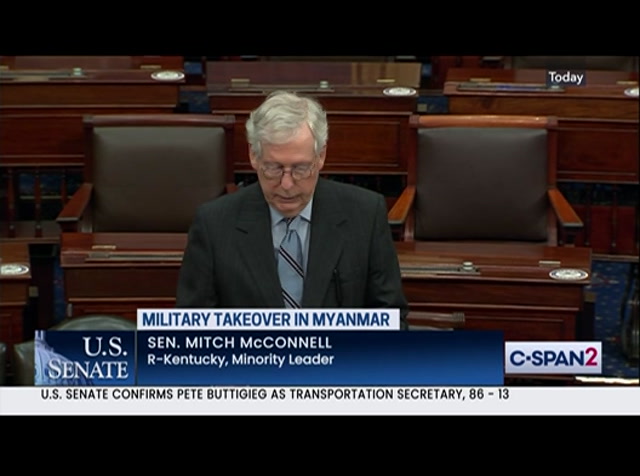 i hope and expect the united states will quickly make obvious legal determination that this is a military coup and impose significant costs on the military for its attack on democracy. we've already had sanctions in place against key military officials in that country and congress has already given the executive branch authorities it needs to swiftly apply even more sanctions to the military and its infiltration into burma's economy. we will also need the help of our friends and allies who to effectively pressure the juna . it's time for nations to impose their own tpot on the military junta. chinese communist parties state newsorganization called the events a major cabinet reshuffle . cabinet reshuffle? that's a joke. and the free world knows it. this is a military coup and an attack on democracy, plain and simple.
1:34 pm 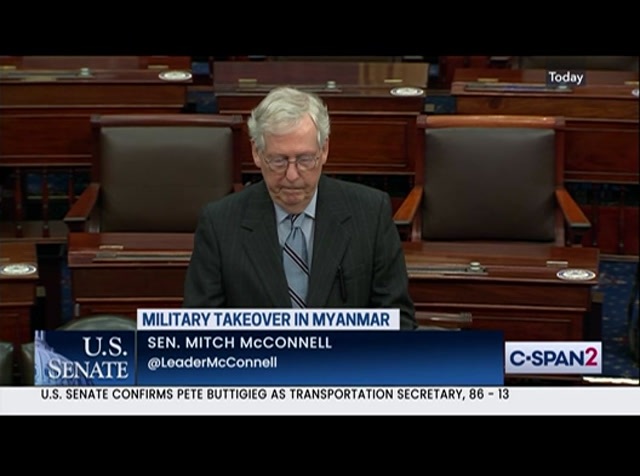 there are two paths before burma. it can continue to tegrow into a modern democratic country connected to the global economy or remain a corrupt impoverished authoritarian backwater in the shadow of the peoples republic of china. the people of burma have said which they prefer. they've spoken at the ballot box. the threat of force must not be allowed to silencetheir choice . >> mister president, i rise to support the nominations of pete buttigieg to be secretary of transportation and alejandro mayorkas to head thedepartment of homeland security. they are both exceptional choices by the administration to fillcritical positions . this afternoon when we vote on mister mayorkas , it will be the completion
left
right
disc Borrow a DVD of this show DVD
tv

Senate Minority Leader McConnell says he will vote against Alejandro Mayorkas to be Homeland Security Secretary. He also talked about the military taking over in Myanmar.