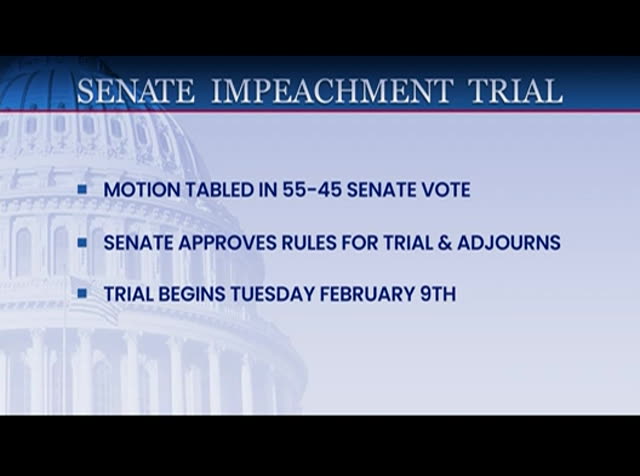 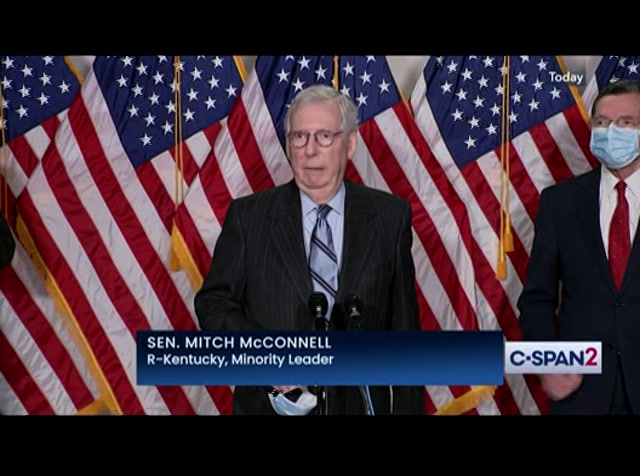 he met with ten members were couple of hours last night and at lunch he had an opportunity to talk with the members who were in the meeting to find a bipartisan way. that the democratic leadership in the house and the senate.
12:15 am 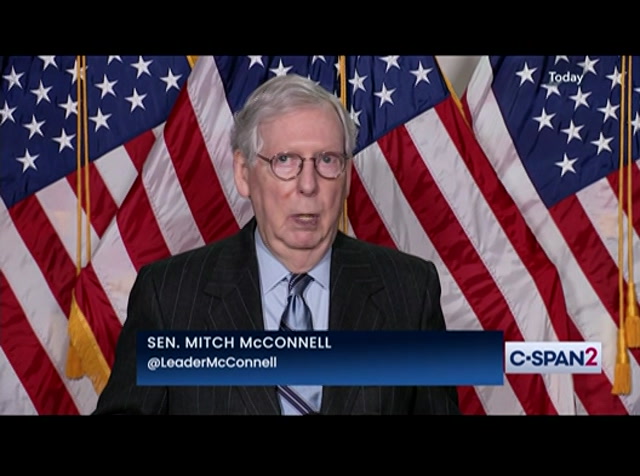 here's writing clearheaded and then to vote and proceed on the budget this afternoon. they have chosen a totally partisan path. i can't remember a budget in the time i have been here totally partisan start the ten minutes could have got in a broad bipartisan support given them a victory early they are at the majority of the house and senate and is a series of choices and then to go down that path and then as the majority leader has announced
12:16 am 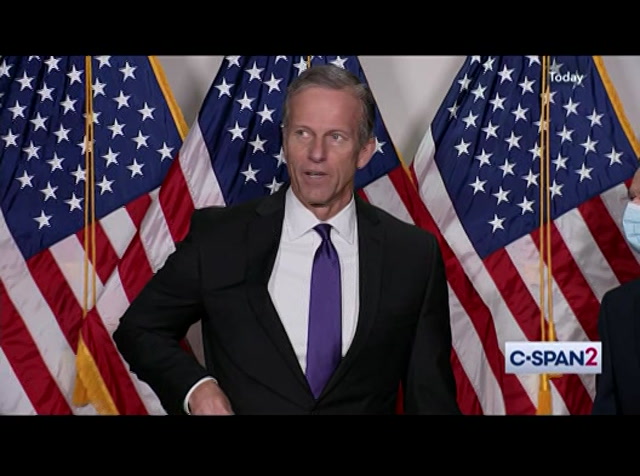 that the agreement we reached some time back on the impeachment front is that the president's lawyers seem to be comfortable with the pretrial agreement that the majority leader and i reached. it looks like we will be on impeachment next week. that is where we are. senator thin. >> thank you leader. it's february 2nd, groundhog day and things keep repeating themselves the president continues to repeat himself and say he wants to work with republicans in congress on a bipartisan solution to coronavirus relief and senator schumer repeatedly undermines any efforts of bipartisan cooperation.
12:17 am 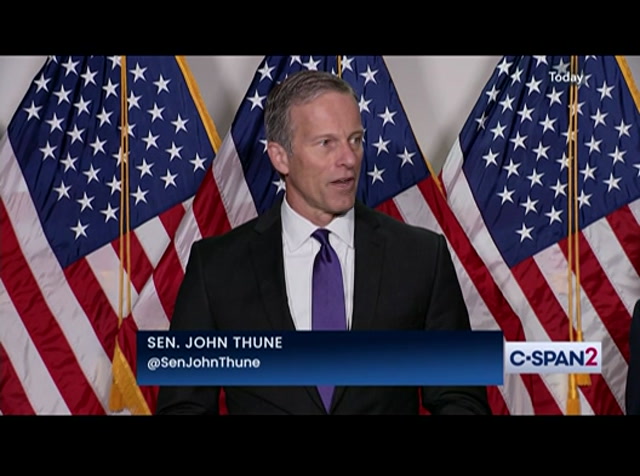 as a leader pointed out we had a group of folks meeting last night and he did echo he would like to see us come up with something that is bipartisan and i would point out we have done five bipartisan packages for relief. when we were in the majority every one of those the old-fashioned way and got 60 votes and now they are deciding to do this in a very partisan way with one party to get everything enacted that they can. on the list of things to get done is the state and local funding. it was pointed out to president biden that if you look at last year, 2019 year over year revenues were asked or higher. so the idea the states across
12:18 am 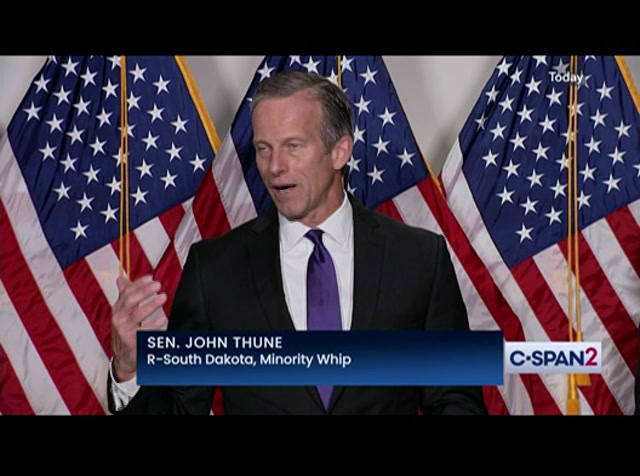 the country are clamoring for a meeting with additional relief does not square with the facts. they went to lift the cap on the state and local taxes that was enacted as part of the 2017 tax reform bill and was made. and if they do that to help out wealthy people with high tax states it is a tax giveaway to high income taxpayers in high tax states so those are a couple of issues that as far as i am concerned on the budget process we are talking about right now. i hope the democrats come back to the table and the leadership here in the congress will start to reflect the sentiments shared because
12:19 am 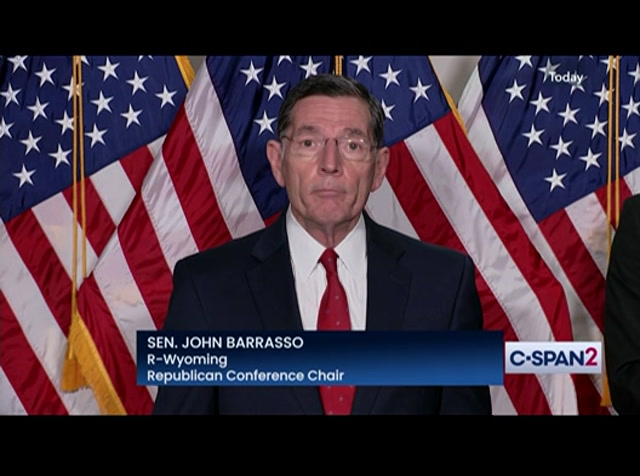 it seems to be right now they are completely different wavelengths with coronavirus relief. >> today is day 14 of the biden administration and on day number one he talked about unity. he said if we are united we can do great things and then he turned around to put out 25 executive orders so many "the new york times" had an opinion piece and said ease off those executive orders the president painted a target on the back of american energy and american energy workers and then with regard to renewable energy it was false hope and misleading information. and with that relief bill. and once again loaded with
12:20 am

things unrelated to coronavirus and they plan to ram it down the throat of the american people with the pure partyline vote. look at the things it is to provide government checks to families making in excess of a quarter of a million dollars per year. it pays people more to not work then work with enhanced unemployment and bonuses. it's the federal mandate to small businesses struggling to double the minimum wage. the small businesses in wyoming are struggling today it will be almost impossible to make payroll. the cbo understands this because they said if they do this mandate to double the minimum wage that one.3 million people would lose their jobs. then there are the's bailouts
12:21 am 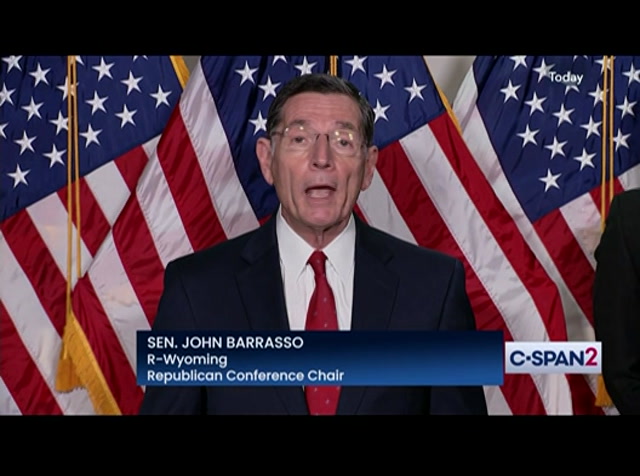 that have been having a history of bad behavior coming to spending. joe biden spent a year running for president on a platform with in a bipartisan way if the president wants to do things in a united way we should do the next corona relief package in a bipartisan way. >> and how the process works and then it actually leads nowhere to have the debate is largely political from the time you might have used otherwise to get something done. democrats are saying to do this three times in the next 18 months.
12:22 am 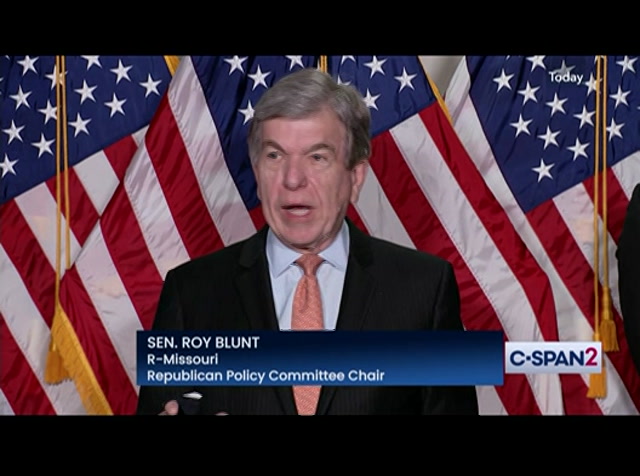 i think they are about to find out in the next six weeks just how hard it is. i'm not aware of any time anybody in the minority side of the budget so everybody has to be there. the when they were there on the majority side voting for a they are sending directions to everybody in the senate and those have to be back by february 16. and the deadline facing quickly is the mid-march deadline that we put it on increased unemployment assistance democrats would be lacking on - - lucky to get to that deadline. and to be a lot less enthusiastic about using tumor
12:23 am 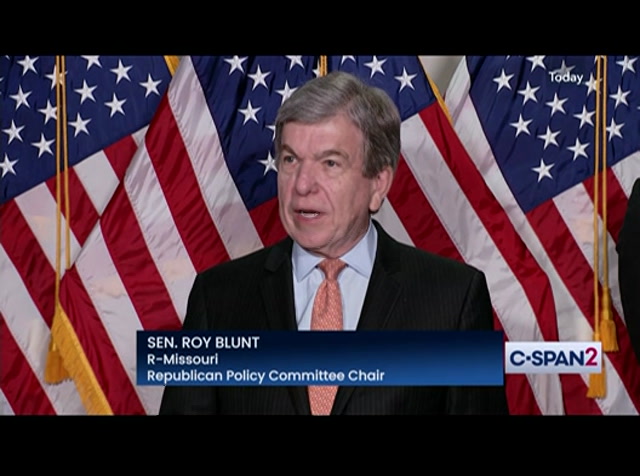 times then we they are telling me and all of you to do this three times in the next two years. >> and it does need to be bipartisan and laser focused but five bills in bipartisan's we need to come together and the present has been preaching unity. and we really need to come together this is the right thing to do the let's do in a bipartisan manner to remain focused on covid-19 not
12:24 am 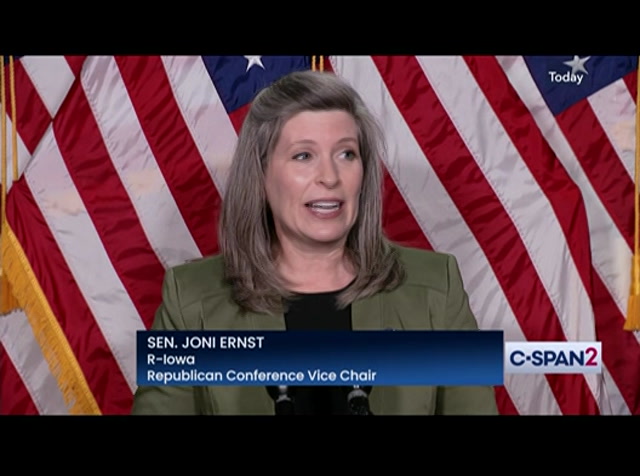 including priorities like a 15-dollar minimum wage which in iowa would hammer our small businesses when they are trying to get back on their feet, they are most vulnerable right now. we all know the way to create a healthy economy right now is by getting our kids back in school and educated. and to opening back up the child care centers. i'm so thankful we have a number of republicans working trying to work in a bipartisan manner on a package that makes sense i'm very include happy they included my work on childcare let's move in a small manner but in a way we are creating unity just as president biden wants to see.
12:25 am 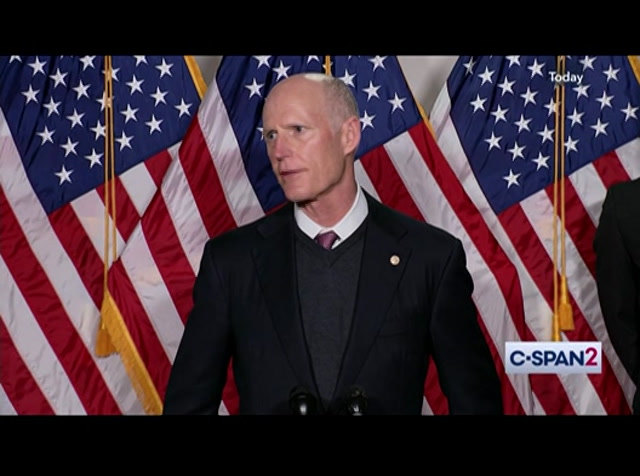 >> i had the ready to go to the biden inauguration with a speech about unity now it's been just the opposite. nothing about unity the democrats don't want to work with republicans but we want to do everything we can to help the people who have lost their job. and we shouldn't be bailing out to states many left illinois and california and new york they don't want to pay for the pension plans and then to be dramatically more and taxpayers shouldn't pay for this. i'm glad the president saw the chart yesterday that the state revenues are not down at all. not even 1 percent and then starting to look at the budgets will be up 12 percent. new york's budget over eight.7 percent. all the money we have given
12:26 am 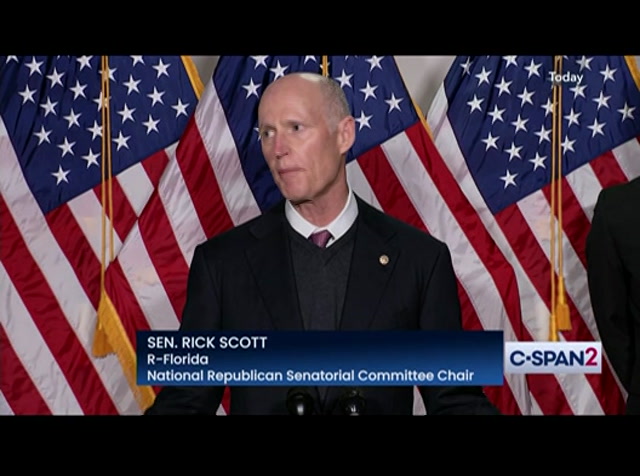 them with $400 billion to spread it around we pay for all those coronavirus costs. and why are you given all this money to stay so we have the debt already? >> have you spoken to leader mccarthy or what outcomes you would like to see? >> first of all leader mccarthy and i have a good working relationship. i did express myself yesterday on that particular new member of the house i think i adequately spoke out how i feel about any effort to define the republican party in
12:27 am 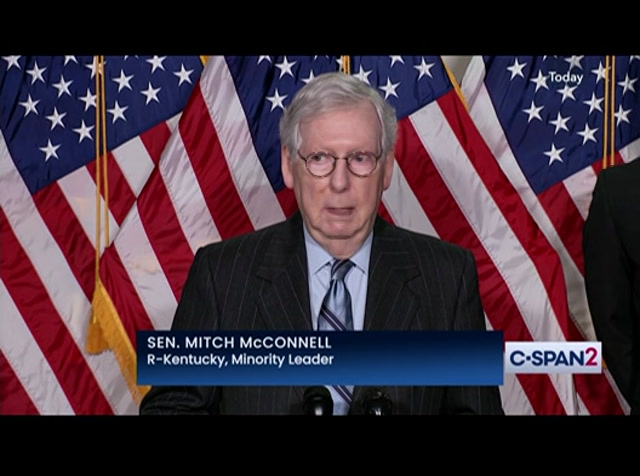 such a way. i think that pretty well covers my view on that. >> speaking at about donald trump's conspiracy about the election much earlier than you ultimately did. >> we will all listen next a week to what the lawyers have to say and make the arguments. >> it sounds like you had a conversation with president biden about what's going on did you talk off topic about covid relief. >> the president : two things one with the issue we talked about earlier to the budget process and covid
12:28 am

relief. if had a long-standing interest relationship and i have stuck with her in recent years as everyone has thrown her under the bus with regard to the accommodation she seemed to have to make with the military in order to keep the civilian government from being disbanded. in spite of all of that, what has now happened is the military government has disbanded the democracy. so regardless of how the countries around the world me feel about the previous criticism of her, she now stands for democracy in burma. the president called and secretary lincoln did as well with a bipartisan basis the strongest possible sanctions that the administration can
12:29 am 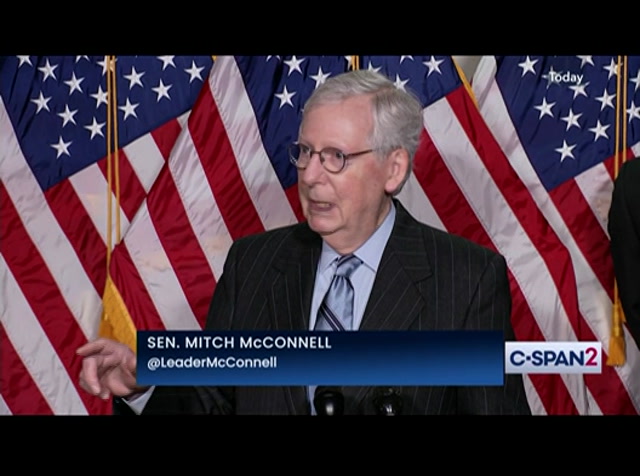 levy against any military leaders we haven't levy distinctions against and to do it with one voice and try to unify the rest of the world in our position up to and including to do something in the un what the russians and the chinese would be doing. >> do you go into the impeachment trial having an open mind? >> i went to listen to the argument. that's what we ought to do and what i said before it started. that is still my view. the issue upon which we already voted is an interesting constitutional question. we need to listen to the lawyers argue the question. thanks a lot. [inaudible conversations]
left
right
disc Borrow a DVD of this show DVD
tv

Senate Minority Leader Mitch McConnell (R-KY) spoke to reporters following his conference's weekly policy luncheon on Capitol Hill. The minority leader told reporters he had conversations with President Biden about additional COVID-19 relief legislation and his conference was briefed by the group of 10 Senate Republicans who met with the president the previous night. "We're off to a totally partisan start," he said, observing that President Biden seemed more interested in reaching a bipartisan compromise than White House staffers and congressional Democrats. He was also asked about his recent criticism of Rep. Marjorie Taylor Greene (R-GA) and whether he regretted not pushing back earlier on former President Trump's statements on the 2020 election. "With regard to the former president, we're going into an impeachment trial next week. We're all going to listen to what the lawyers have to say and make any arguments and work our way through it," he said. The minority leader also said he h