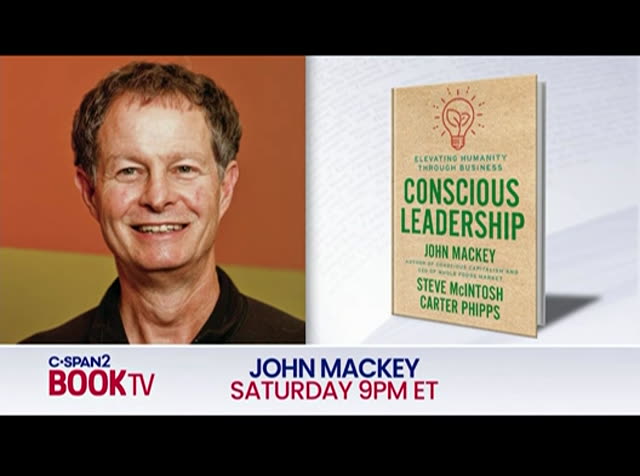 mackey in his approach to leadership and business. and sunday at 9:00 p.m. eastern on afterwards, founder of the center for rural enterprise and environmental justice. >> the u.s. house and the u.s. senate finished counting the electoral college ballots and officially certified the election of joe biden and kamala harris with 306 electoral votes. here is a portion of the joint session of congress.
10:03 am 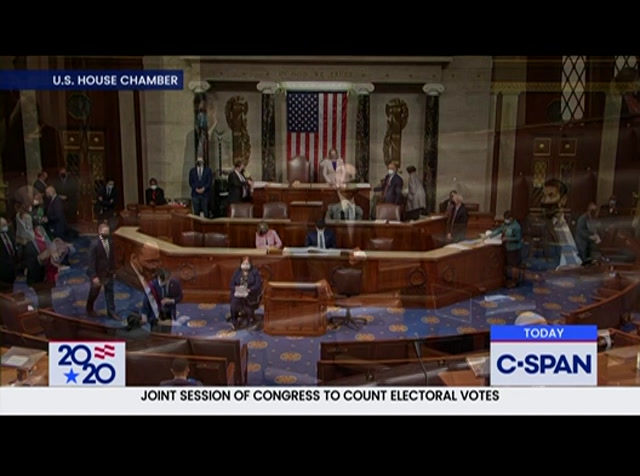 >> the vice president and the united states senate. [applause]
10:04 am 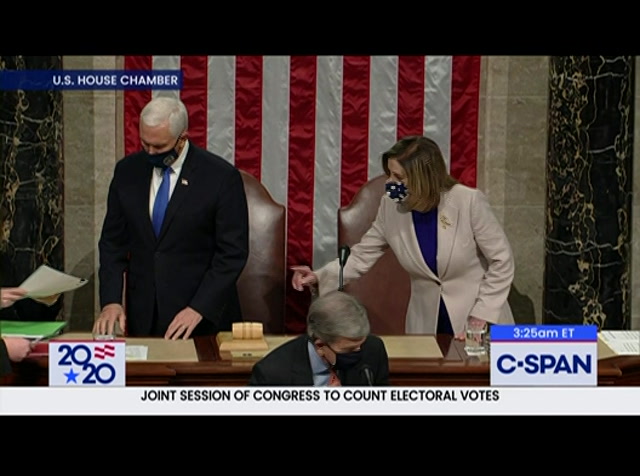 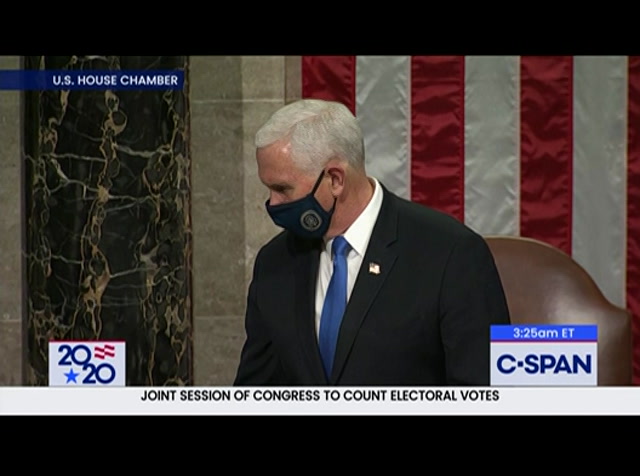 >> the joint session of congress to count electoral vote will resume.
10:06 am 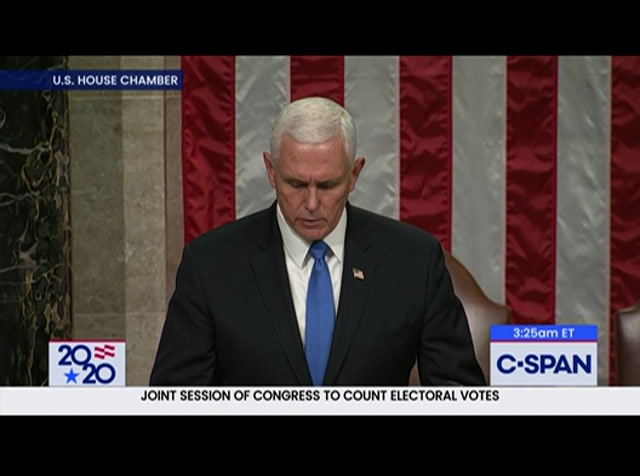 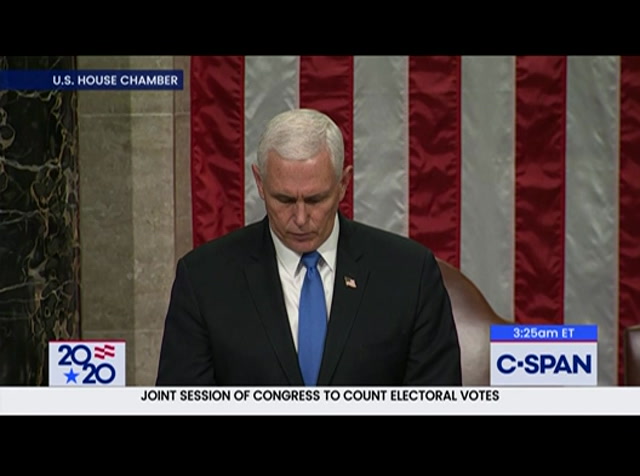 one of title three, united states code. because the two houses have not sustained the objection, the original certificate submitted by the commonwealth of pennsylvania will be counted as provided therein. tellers when no record and announce the vote for the state of rhode island, president and vice president in accordance with the action of two houses. this certificate from rhode island, the me toentary advised a point ascertain electors. mr. president, the certificate to the state of rhode island seems to be regular in form and authentic and it appears that joseph r biden jr. in the state of delaware received four votes for
10:08 am 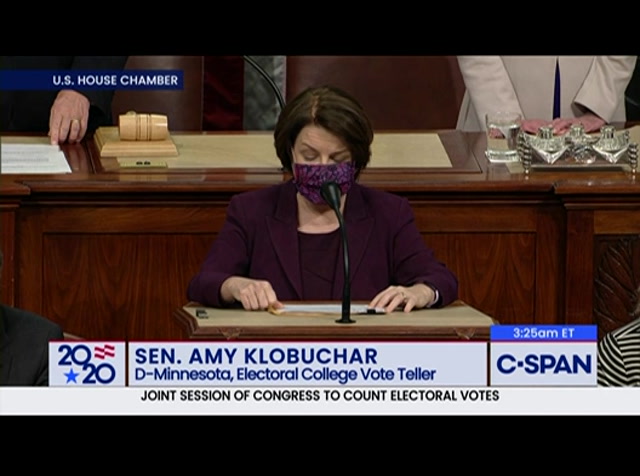 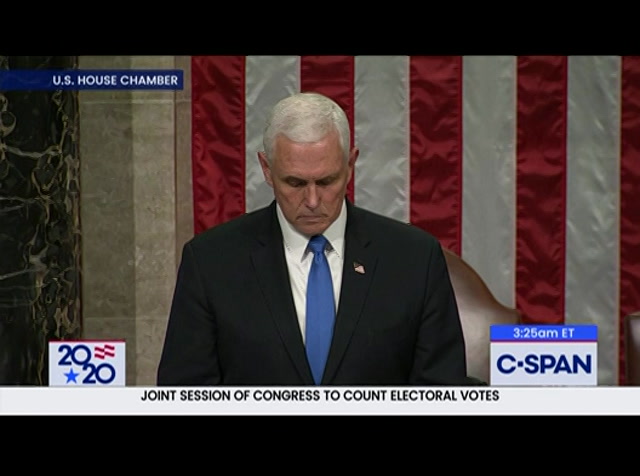 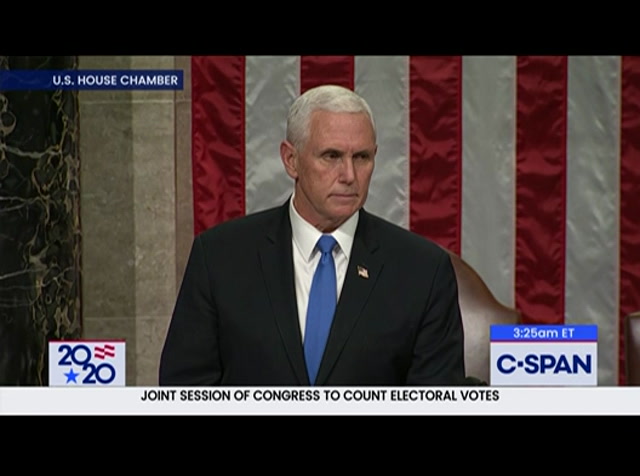 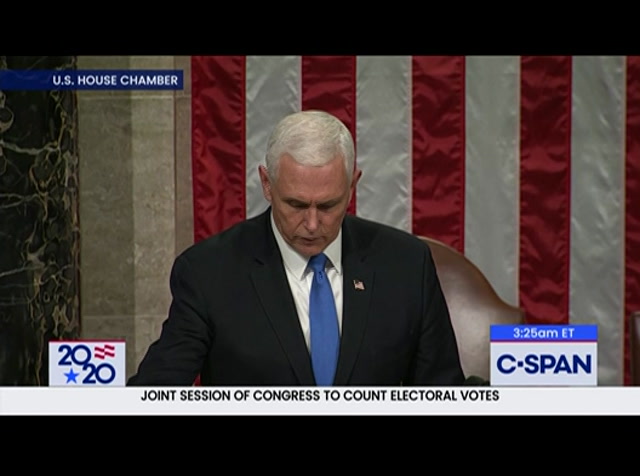 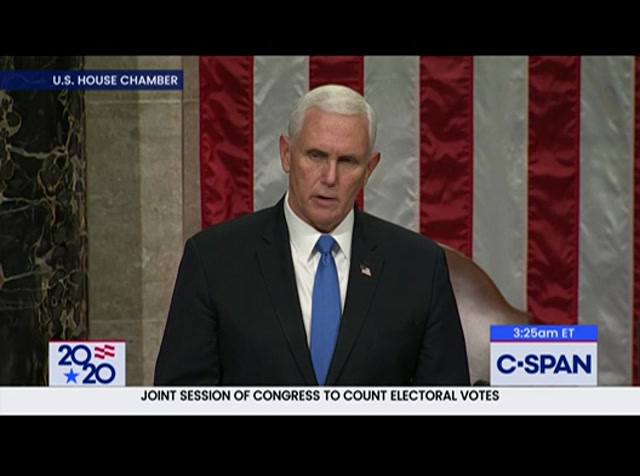 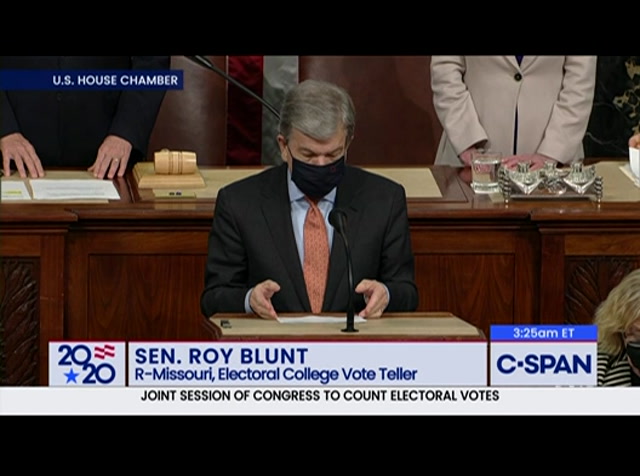 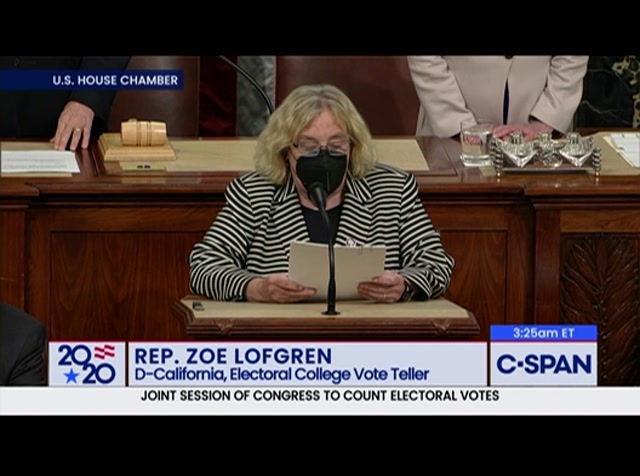 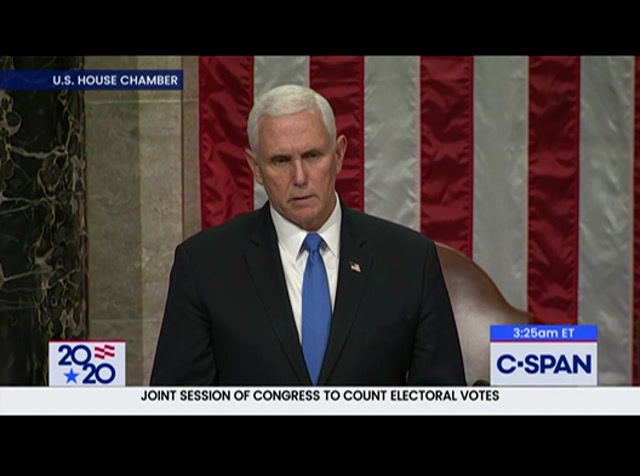 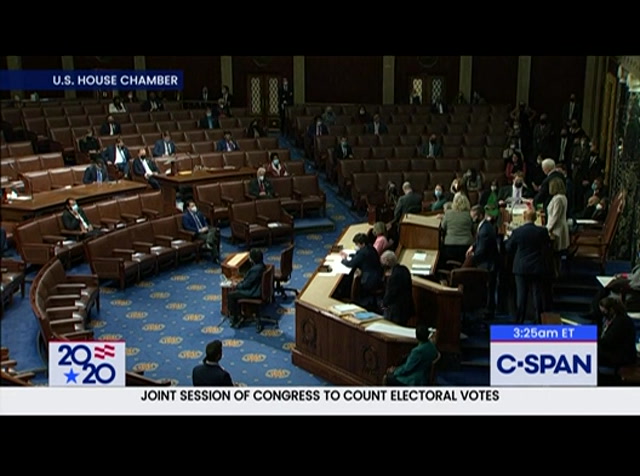 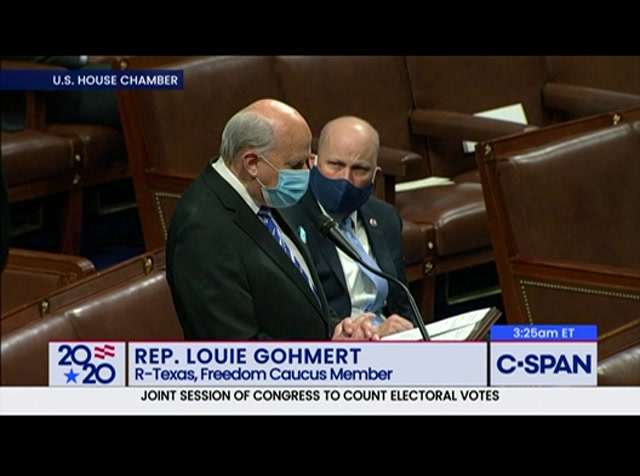 lawful, peaceful institutions free of violence and though not a single court is allowed an evidentiary hearing to listen to the significant body of evidence of fraud that some see as the courts failures to misrepresent that no court would listen to the evidence as saying evidence did not exist, while democrat leaders in milwaukee illegally and unconstitutionally created more than 200 illegal polling places, tens of thousands of votes were changed by workers despite election workers objections, and so many other illegalities to create a 20,000 vote lead. we object along with a senator who now has withdrawn his objection. >> section 15 and 17 of title iii of the united states code requires that any objection be presented in writing, signed by a member of the house of representatives and a senator.
10:18 am 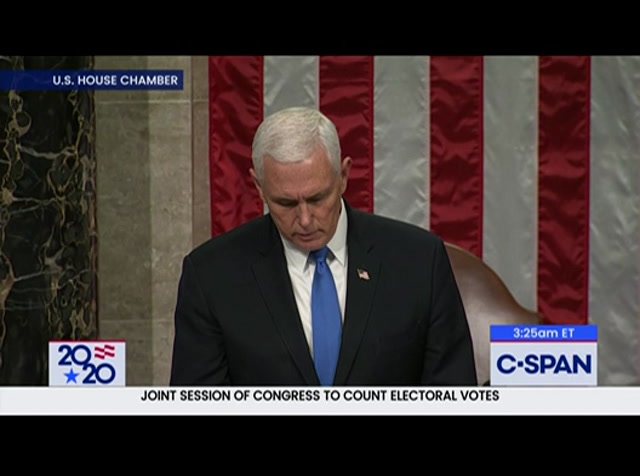 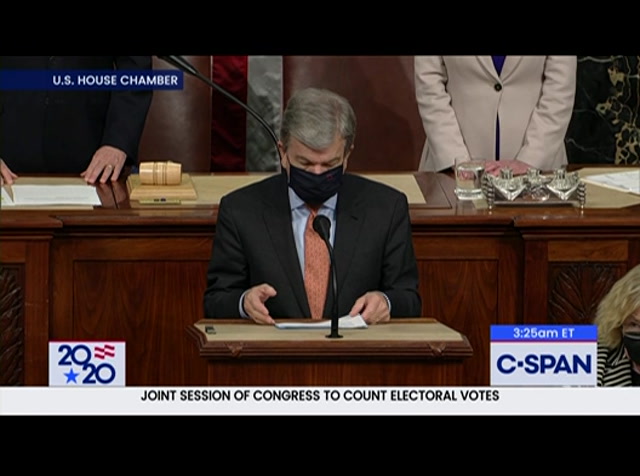 three votes for vice president. >> are there any objections to counting the certificate of the vote of the state of wyoming that the teller has verified, appears to be regular in form and authentic? hearing none. the chair advises members of congress the certificate having been read, the tellers will ascertain and deliver the results to the president of the senate. >> the undersigned, tellers on the part of the senate, tellers on the part of the house of representatives, report the following as the results of the
10:20 am 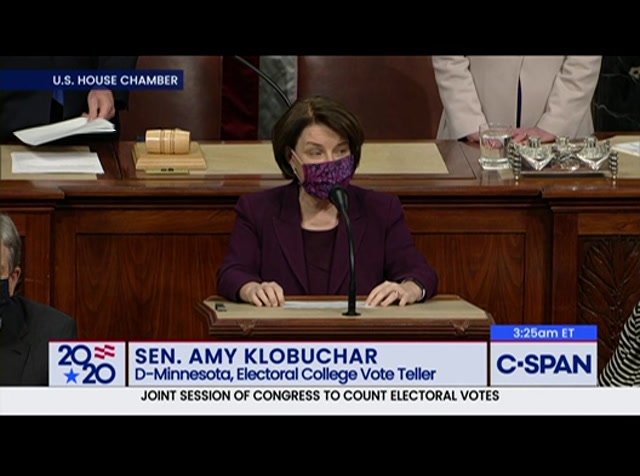 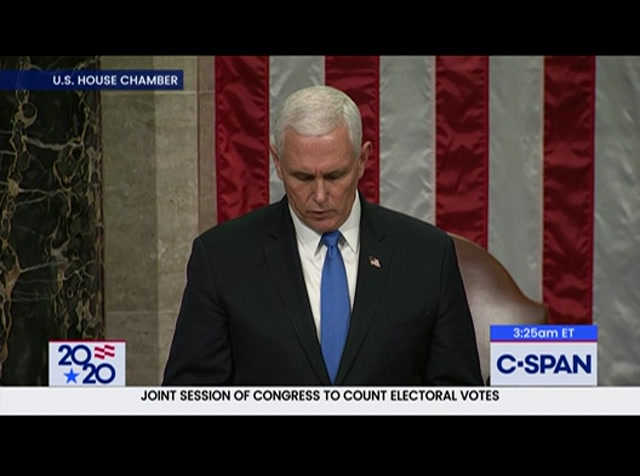 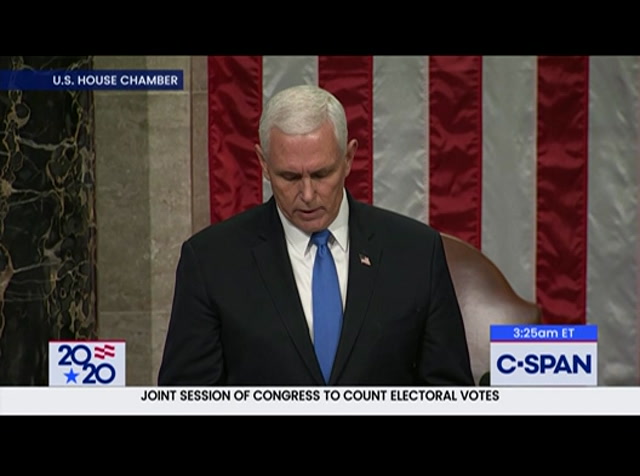 they shall be entered together with the list of the votes on the journals of the senate and the house of representatives. the chair now recognizes for the purpose of closing prayer the 62nd chaplain of the united states senate, chaplain barry black. >> let us pray. lord of our lives and sovereign weour beloved nation, deplore the desecration of the ,nited states capitol building ,he shedding of innocent blood loss-of-life, and the quagmire
10:23 am 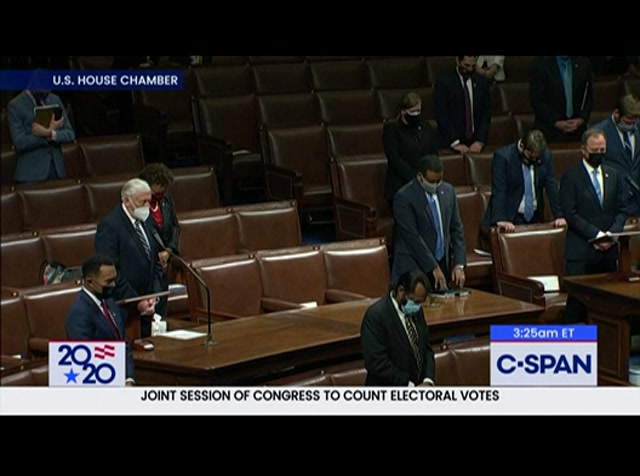 of dysfunction that threatened our democracy. tragedies have reminded us that words matter, and that the power of life and death is in the tongue. we have been warned that eternal beilance continues to freedom's price. lord, you have helped us remember that we need to see in humanityr a common that reflects your image. you have strengthened our resolve to protect and defend the constitution of the united
10:24 am 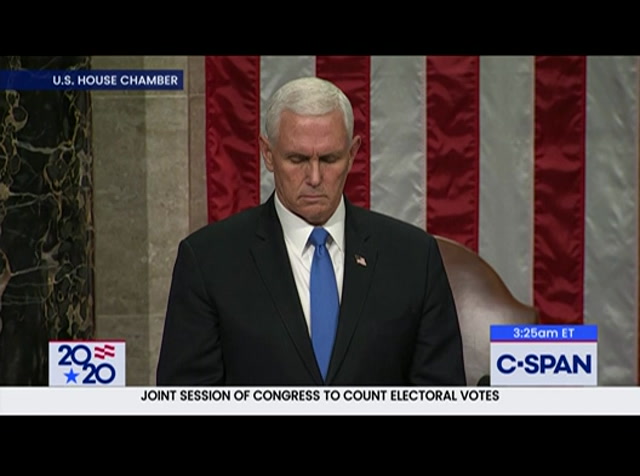 enemies,ainst all domestic as well as foreign. use us to bring healing and and divided hurting nation and world. thank you. for what you have blessed our lawmakers to accomplish in spite of threats to liberty. bless and keep us. drive far from us all wrong hearts toncline our feetur will, and guide our on the path of peace. and god bless america. name,y in your sovereign
10:25 am 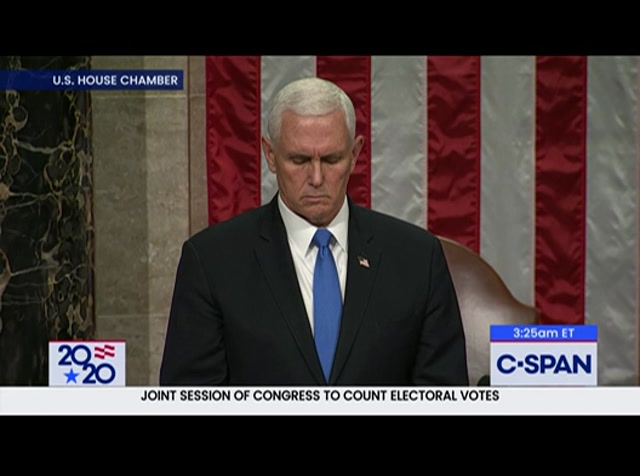 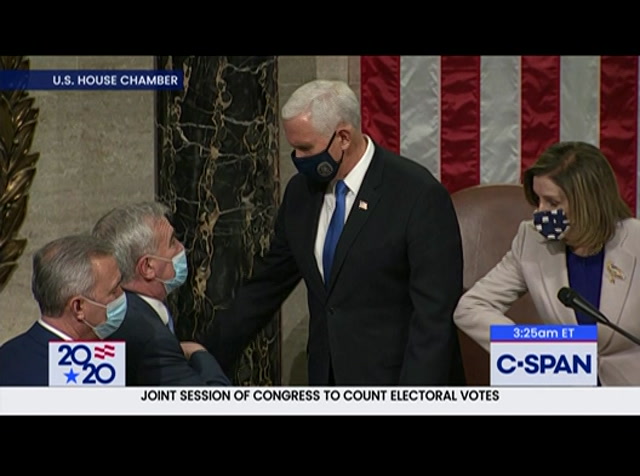 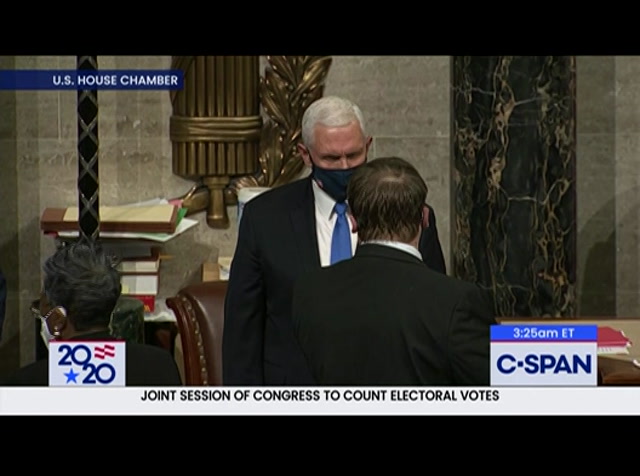 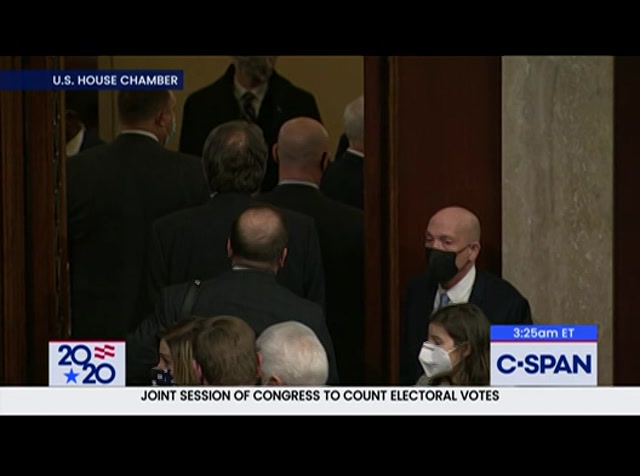 >> following yesterday's attack on the u.s. capital, nancy pelosi will hold her weekly news briefing this afternoon. live coverage begins at 1:00 p.m. eastern on c-span. joe biden was certified by congress at the 46th president early this morning and this afternoon he is expected to announce a number of his picks for justice department positions. watch live coverage starting at 1:30 eastern online at c-span.org or listen with the free c-span radio app.
left
right
disc Borrow a DVD of this show DVD
tv

The U.S. House of Representatives and the U.S. Senate returned to a joint session to finish counting the results of the Electoral College ballots for president and vice president in the 2020 election. Joe Biden and Kamala Harris were confirmed as the winners with 306 electoral votes. Donald Trump and Mike Pence received 232 electoral votes.