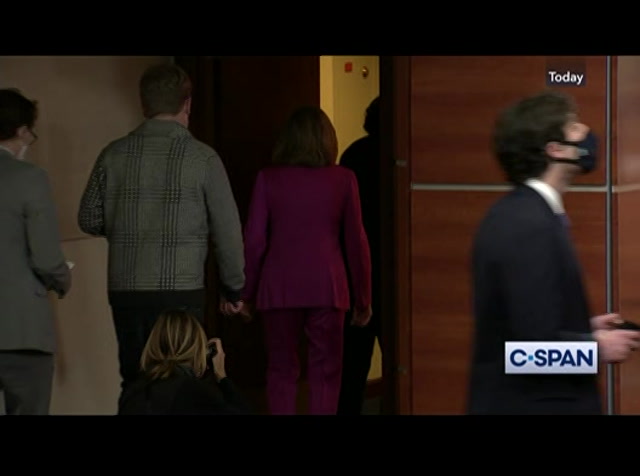 do you want him to come? [captions copyright national cable satellite corp. 2021] [captioning performed by the national captioning institute, which is responsible for its caption content and accuracy. visit ncicap.org] [indiscernible] washington journal. every day we are taking your calls live on the air. we discuss policy issues that impact you. friday morning, a discussion about the 25th amendment and the history of contentious elections with the miller center director and ceo. watch c-span's washington journal live at 7:00 eastern friday morning. join the discussion with your phone calls, facebook comments, text messages and tweets. senate democratic leader
8:30 pm 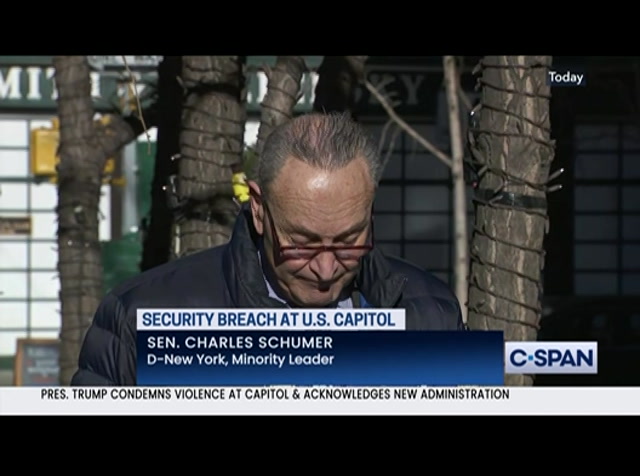 chuck schumer also called for president trump to be removed from office, saying he cited insurrection by encouraging the mob that breached the senator schumer: good morning, good afternoon. what happened at the u.s. capitol yesterday was an insurrection against the united states incited by president trump. the president promoted conspiracy theories that motivated these thugs. come to ourthem to nations capital. he told them to march down pennsylvania avenue and he said you will never take out -- take back our country with weakness. fed thet trump's lies crowd. he directed their anger at capitol hill.
8:31 pm

whipped themry into a frenzy. these were rioters, insurrectionists, thugs, the master terrorists. -- they were -- for this yesterday. nolting and c. nolting itsy for these people. over, theyameras all have their pictures, the matter what part of the country they came from, we should go after them right now. make no mistake about it. acts yesterdayle
8:32 pm 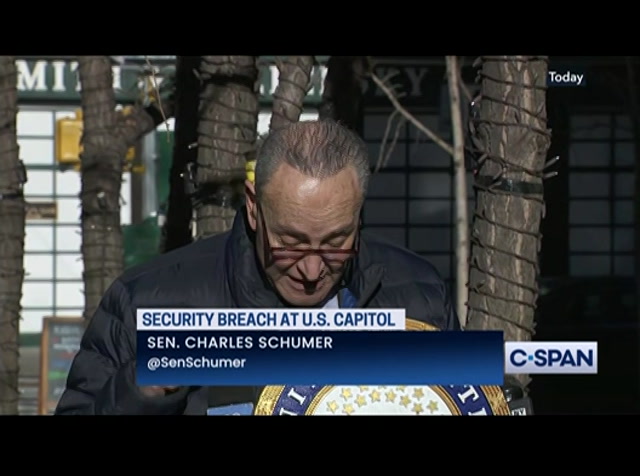 were incited by the president of the united states. yesterday's events would not have happened without that. if there were no president trump, this would not have happened, plain and simple. the fish stinks from the head. plain and simple. i believe the president is dangerous and should not hold office one day longer. he may have only 13 days left as president but yesterday demonstrated that each and every one of those days is a threat to democracy so long as he is in power. the quickest and most effective way to remove this president from office would be for the vice president to immediately invoke the 25th amendment. the vice president can invoke the 25th amendment today and if the cabinet votes, he is gone. they should do it now.
8:33 pm 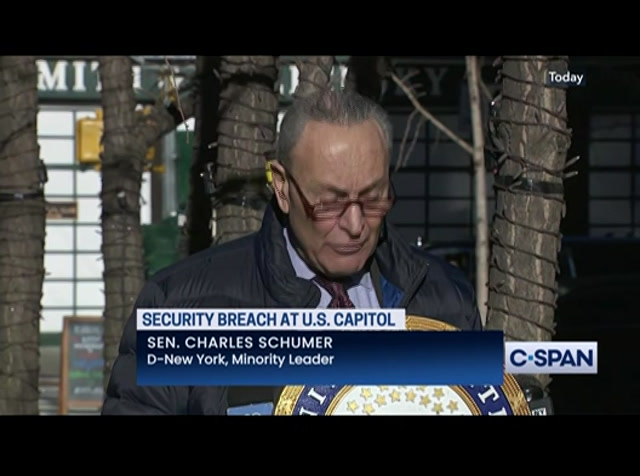 if the vice president and the cabinet refuse to stand up, congress should reconvene to president, plain and simple. we do not need -- [applause] we do not need a lengthy debate. the president's abuse of power, his incitement of a mob against a duly elected representative body of the united states is a manifestly impeachable offense, if there ever was an impeachable offense, what the president did was it. and if you don't think you won't spend his days out of office promoting conspiracies, stoking grievances, and doing more of the same, you are kidding yourself. if you think he won't promote
8:34 pm 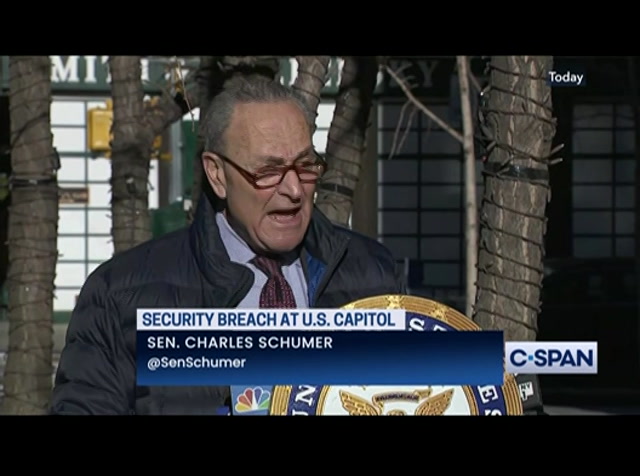 the idea of him running again four years from now to motivate his supporters, you are kidding ourselves. in an impeachment, there is a charge that allows congress to say he can never run for office again. that should be invoked as well. so, if the vice president and the cabinet won't invoke the 25th congress, congress should come back immediately and impeach the president. get him out of office. [applause] and speaker pelosi and i tried to call the vice president this morning to tell him to do this. they kept us on hold for 25 minutes and then said the vice president would not come on the phone. so we are making this call public, because he should do it, and do it right away. before i open up to questions, i want to convey to people how seriously we have to treat the
8:35 pm 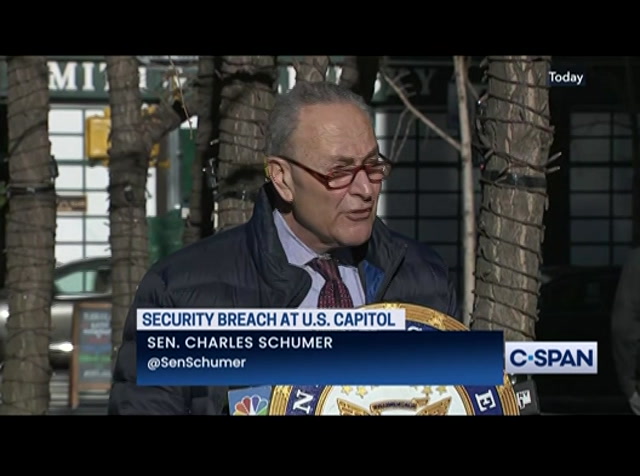 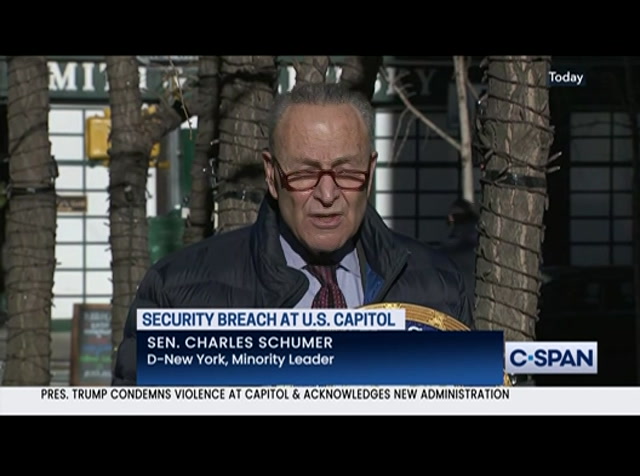 numbered. we have to fight this with all we can. i would like to make one other point on a related subject. that is not the whole statement. ok. it was appalling how ill-prepared congress was for these attacks, which were known about in advance. i will dismiss the sergeant at arms the day i become majority leader, january 21, if mcconnell, who appointed him, does it sooner. he must go. he did a terrible, terrible job. the men and women of the capitol hill police are fine people but they had no leadership, no preparation. everyone knew this would have been. the sergeant at arms has been
8:37 pm 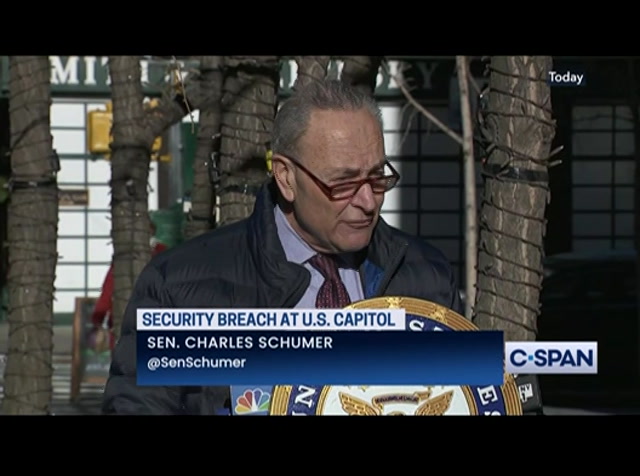 derelict in his duty, he doesn't deserve to be in office. he was appointed by mitch mcconnell as majority leader. if mcconnell does not get rid of him, i will the first day that i become majority leader january 21. we are only talking questions on these two subjects. >> [inaudible] senator schumer: we need a full investigation of everything that happened. the dereliction of the sergeant at arms, the lack of security preparation, and of any capitol hill police shirk their duties. we will get that when i become majority leader if not sooner.
8:38 pm 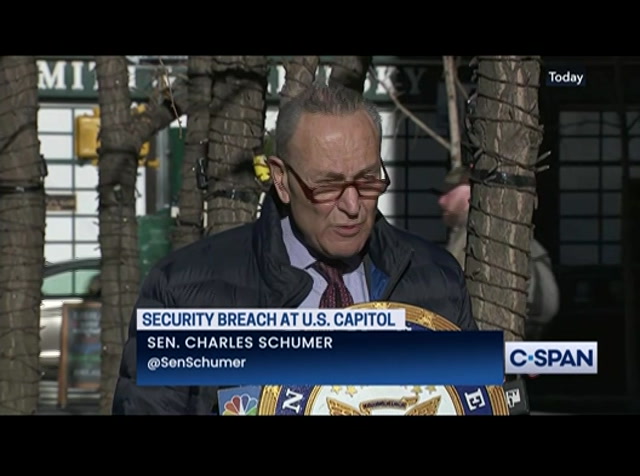 i will tell you this. this was a frightening experience. at one point, i was only 30 feet away from protesters down the hall. to have what happened should never ever happen again. furthermore, and this was bipartisan, speaker pelosi, leader mcconnell, leader mccarthy and i got on the phone with the secretary of defense, on the phone with the attorney general attorney general, secretary of the army, and many other officials and push them to get more police there quickly. there were not enough forces there. the question is why were they not there in advance and why didn't they get there asap? all of that needs looking into. >> [inaudible] sen. schumer: speaker pelosi and the house initiated. a large number of her members have called for it. i leave it to them to do it asap.
8:39 pm 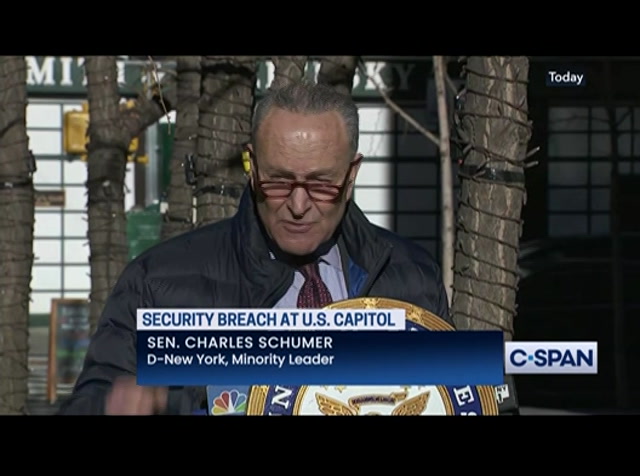 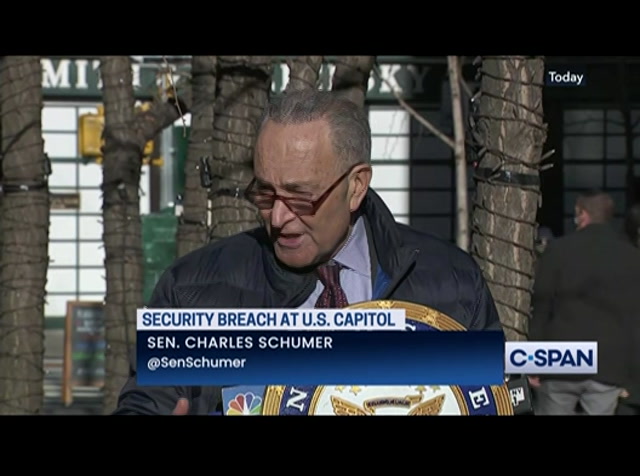 hopefully, they are thinking about it now. >> [inaudible] sen. schumer: i spoke to the attorney general yesterday. acting attorney general rosen. i asked him to get the president to issue a statement that the protesters -- you are not protesters. thugs and goons should leave the hill. i asked did you ask the president what to do about it? he didn't say yes and that appalled me. we issued a statement and then the president issued a statement. his statement was not a good statement, not somebody who saw the danger. that is typical of trump. >> [inaudible] sen. schumer: i am going to leave it to law enforcement as the best way to prosecute, but every one of them should be prosecuted with no leniency,
8:41 pm 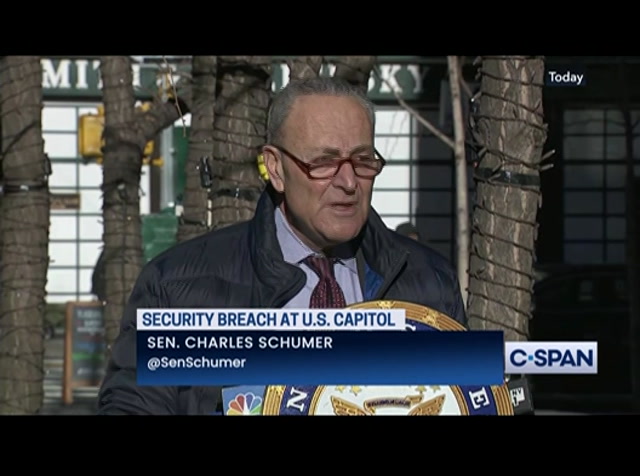 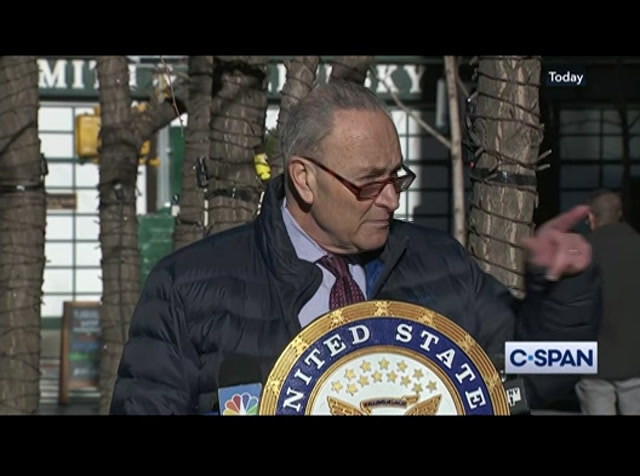 statement. in general. >> [inaudible] sen. schumer: we talked to mayor bowser on the phone, and she was ready to send the dc national guard and quickly. it took the dod too much time before they got there. thank you, everybody. good. i support speaker pelosi's move to do impeachment. should the house impeach, i will do everything i can to get the senate to move as quickly as possible. thank you, everybody. >> you are watching c-span, your unfiltered view of government.
8:43 pm 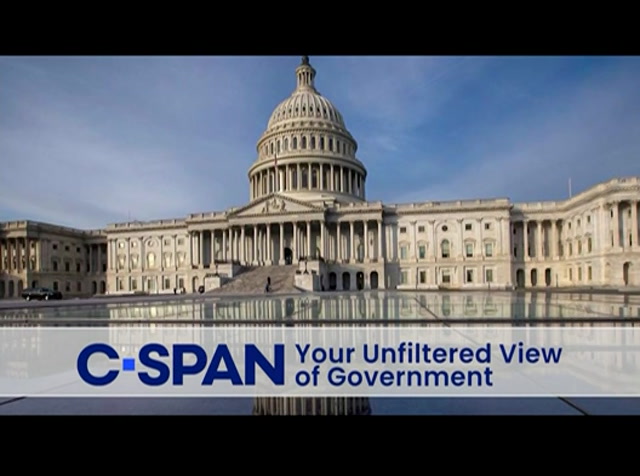 america's created by cable television companies in 1979. brought to you by these television companies that provide c-span2 viewers as a public service. >> a recorded message released this evening, president trump condemned the violence and acknowledged that a new administration will be inaugurated later this month. former president from: like all president former buildingsecured the and told him to expel the intruders. america is and must always be a nation of law and order. the demonstrators who infiltrated the capital
left
right
disc Borrow a DVD of this show DVD
tv

Senate Minority Leader Charles Schumer (D-NY) held a news conference in New York City a day after the security breach of the U.S. Capitol. He said President Trump should not hold office one day longer and called on Vice President Pence to immediately invoke the 25th Amendment. Minority Leader Schumer said if the vice president and White House Cabinet do not act then Congress should reconvene to impeach the president. In addition, Sen. Schumer called for the dismissal of the Senate sergeant-at-arms.