we are also grateful to the local officers from dc virginia and maryland. to the federal law enforcement officers and national guards and secret service. and all the other professionals who help subdue the criminals and secure the capitol on the sixth and working together to protect peace and order. and tomorrow the president and vice president will swear their oath of office and they will also do so safely and securely because so many brave men and women have sworn their own paths -- oaks to support and defend our great nation. we salute you all. >> the senate returns to session today for what will be a very busy and consequential period. tomorrow we will celebrate one of democracy's core attributes, the peaceful transfer of power,
1:21 am 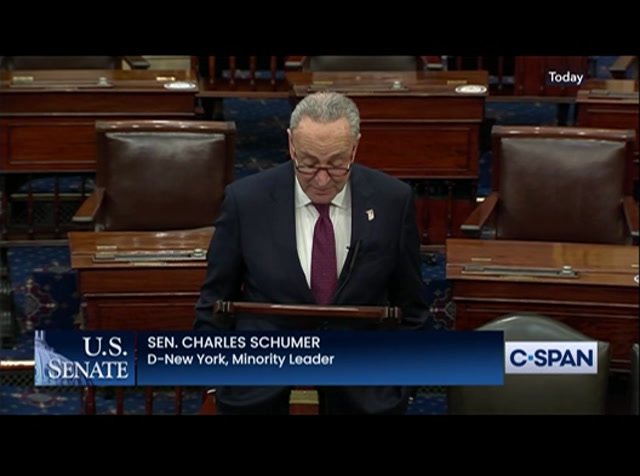 albeit under much different circumstances than most americans are used to. rioters, insurrectionists, white supremacist, and domestic terrorists tried to prevent the transfer of power. they were incited by none other than the president of the united states. they have failed. though they have made the transition of power anything but peaceful, democracy's oldest and most revered tradition, the peaceful passing of the torts, will take place tomorrow. we must remain vigilant. we must remain strong. if we do, democracy will always prevail. despite what these people terrorists tried to do, the peaceful passing of the torch will take place tomorrow as it has for generations. in the weeks since the attack, the nation has learned about the
1:22 am 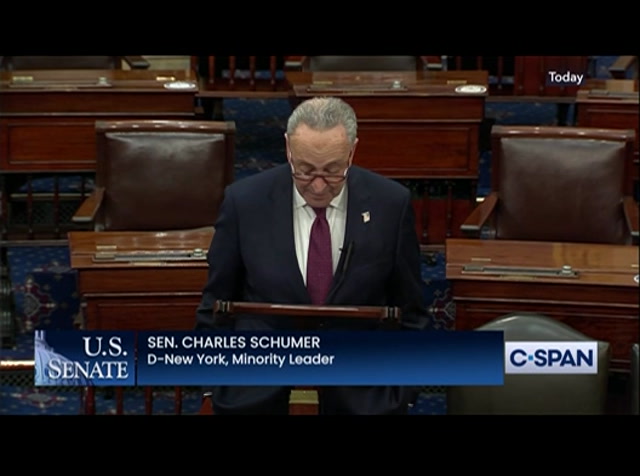 heroism displayed by many capitol police officers on january 6. i want to again thank those officers who protected members and staff and let us also recognize the bravery of one officer in particular, the officer who was killed in the line of duty. i also want to acknowledge the members of the fourth estate for their efforts during this difficult times for continuing to shine a light on what was happening at the capital. sometimes at great personal risk. now, in the wake of the despicable assault on the u.s. capitol on january 6, we have taken precautions to ensure the safety of the inauguration of president-elect biden tomorrow. senate leadership has been in close and constant communication with the secret service, the fbi, the national guard, and the d.c. police. as we speak, there are more
1:23 am 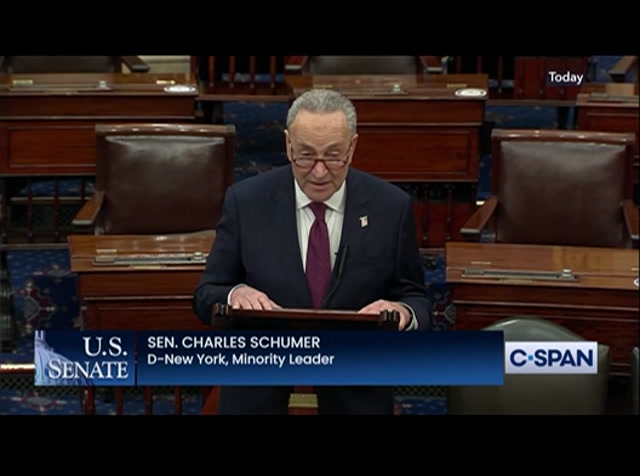 troops around the capitol than there are in afghanistan. no force will prevent tomorrow's constitutional proceedings from taking place. tomorrow, joe biden and kamala harris will be administered the oath of office. they will be sworn into the presidency and the vice presidency of the united states. and the powers vested in our chief executive will flow to a new officeholder. a peaceful passing of the torch, as it has been for over two centuries in the grand tradition of democracy in the united states of america. tomorrow the country will turn the page on the most chaotic and divisive presidency that can ever be remembered. we will begin again the hard work of unifying this nation, to defeating the pandemic, recovering our economy, and
1:24 am 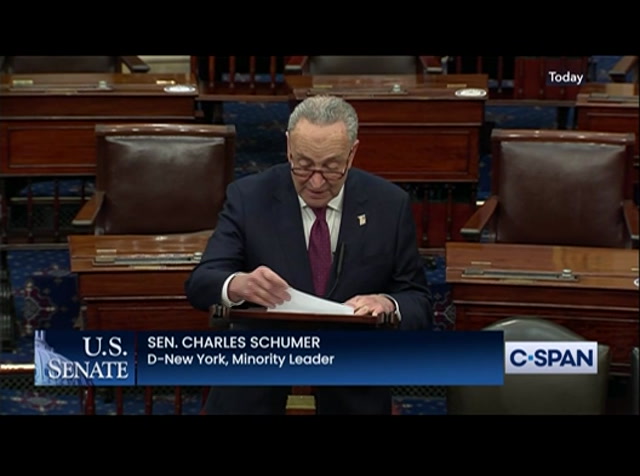 repairing our standing in stature in the world. and this is just the beginning. the inauguration of a new president and the start of a new administration always brings a flurry of activity to our nation's government. but rarely has so much piled up for the senators during this particular transition. over the next several weeks, the senate must accomplish three essential items. a second impeachment trial of donald trump, a confirmation of president biden's cabinet and other key officials, and legislation to provide much-needed, almost desperately needed covid relief. again, that's three essential items of business. one, as mandated by law and the constitution, once the house of representatives delivers articles of impeachment to the senate, we will conduct and complete a trial of donald trump
1:25 am 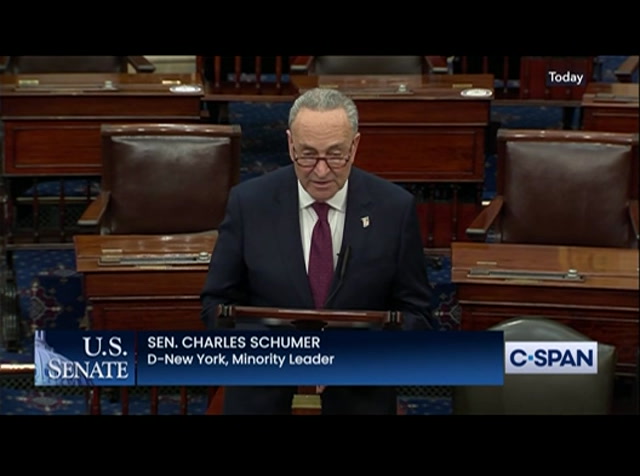 for inciting insurrection. -- insurrection against these united states. two, the senate will confirm key members of soon to be president biden's cabinet. those cabinet officials in charge of national security must be confirmed quickly as well as those in charge of responding to the current health and economic crises. and three, the senate will take up legislation to provide the country additional relief from the pandemic. on impeachment, the senate has solemn responsibility to try and hold donald trump accountable for the most serious charge ever levied against the president. the incitement of an insurrection against the united states of america. the events on january 6, make no mistake about it, were not a spontaneous demonstration.
1:26 am 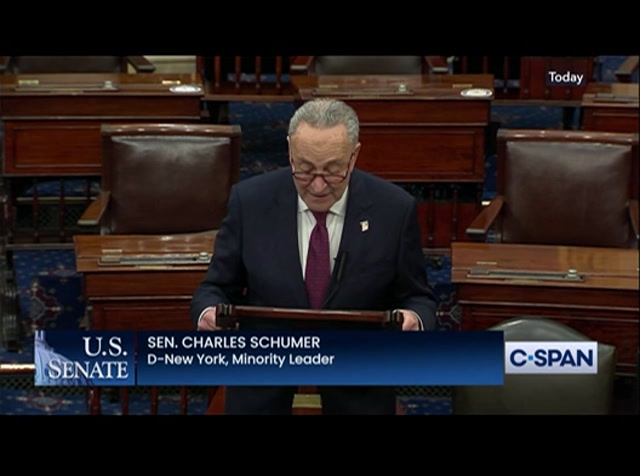 president trump invented the lie that motivated these criminals and he exhorted them to come to washington. he then directed them at the u.s. capitol and the his demagoguery whipped them into a frenzy. we need to set a precedent that the severest offense ever committed by president will be met by the severest remedy provided by the constitution. peach men and conviction by this chamber. as well as disbarment from future office. in 230 years the president has impeached only twice. in just in the past 13 months, it has impeached president trump twice more. president trump is a threat to our constitutional order, whether he is in or out of office. even now, he has not accepted responsibility for what he has done and still falsely maintains
1:27 am 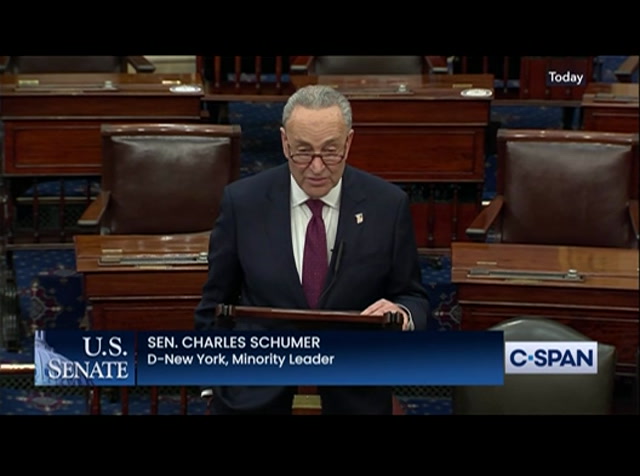 that the election was stolen. once he leaves office, do we really expect him to change his tune and accept the truth? of course not. he will continue spreading lies about the election and stoking the grievances of his most radical supporters. using the prospect of a future presidential run to poison the public arena at a time and we must get so much done. after what he has done the consequences of which we were all witness to, donald trump should not be eligible to run for office ever again. all of us want to put this awful chapter in our nations history behind us, but healing and unity will only come if there is truth and accountability. not sweeping such a devere -- severe charge, such awful actions, under the rug. so let me be clear.
1:28 am 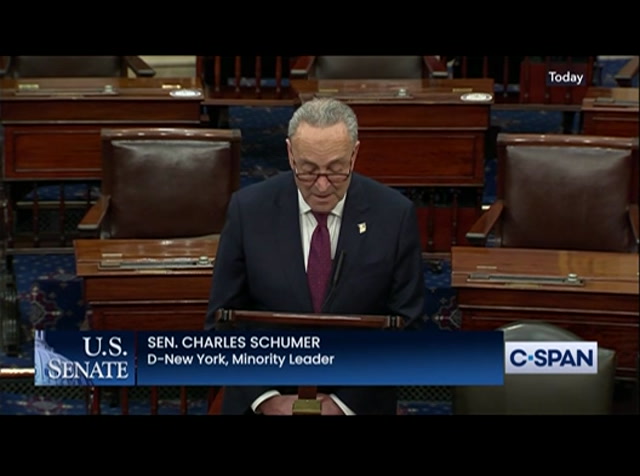 there will be an impeachment trial in the united states senate. there will be a vote on convicting the president for high crimes and misdemeanors. and if the president is convicted, there will be a vote on barring him from running again. now the cabinet. as i mentioned, the senate must also fulfill its constitutional duty to advise and consent on soon to be president biden's executive and judicial nominations, particularly his cabinet. today there are no fewer than five senate hearings on cabinet level officials, for good reason. the violent insurrection at the u.s. capitol on january 6 showed us we need qualified senate confirmed people in key national security positions on day one. that means tomorrow. the senate will be in session tomorrow after the conclusion of the inauguration of the 46 president of the united states. with cooperation, we can confirm
1:29 am 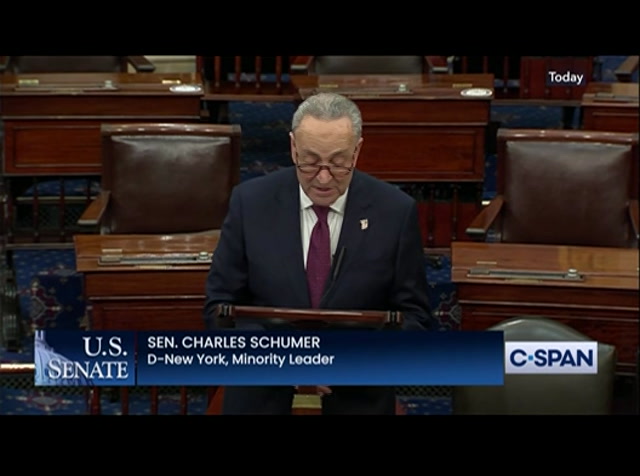 key national security nominees at state and department of defense, homeland security, treasury, and the intelligence community. the health and economic challenges our nation faces, the need to get vaccines out weekly, also require having key health officials and key economic nominees confirmed an on-the-job as soon as possible. in 2017, the senate confirmed president trump's secretary of defense and his secretary of homeland security on inauguration day. president biden should have the same officials in place on his inauguration day at the very least. that is the expectation and tradition for any administration, but especially now, in the midst of a homeland security crisis. as i said, the way the senate worked, it will take cooperation from our republican colleagues
1:30 am 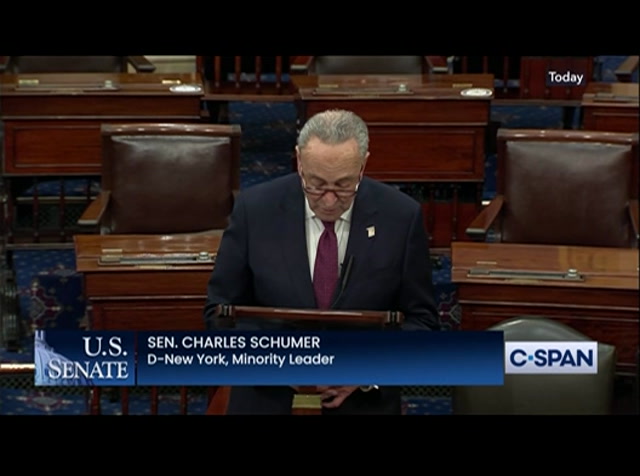 to quickly confirm these highly qualified national security officials. but make no mistake, the senate will move quickly to consider and confirm president biden's cabinet. finally, on covid, and the legislation that is needed. once the senate has confirmed key nominations for the incoming administration, it will turn to the subject of additional covid relief. items including key items such as increased direct payments to american families, strong, further support of vaccine distribution, which much -- which must be improved. help for small businesses, schools, and state and local governments. very soon the country will pass another tragic milestone. 400,000 american deaths from covid-19. there is no issue more urgent
1:31 am 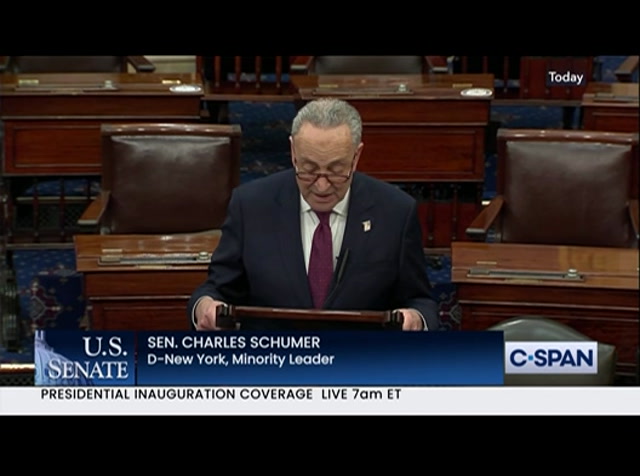 than defeating this pandemic and the senate will immediately set to work on that goal is the first order of legislative business. there will be much more work for us to do in the following months. working with president biden and our house colleagues, the senate will finally address the major challenges facing our country that have too long been ignored. we will consider bold legislation to defeat the climate crisis by investing in clean infrastructure and manufacturing. which will create millions of good jobs for americans regardless of zip code. we must move significantly to improve our health care and childcare systems. to fix our historic income inequality problem. we will fight to restore workers rights with fairness and the tax code. today we announced the first bill, senate s1, will be a package of long-overdue reforms to protect our democracy after it has been so attacked in four years, and guarantee every american's right to vote.
1:32 am 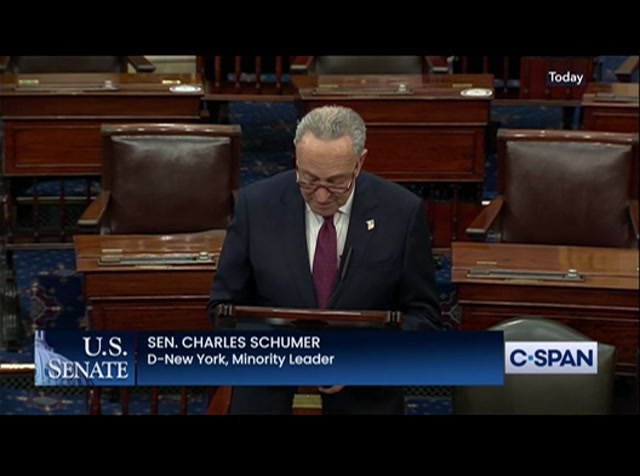 when issue that has been long important to me is immigration reform. i have always felt that comprehensive immigration reform with the past two citizenship is one of the most important things a democratic congress can do. to me, passing comprehensive reform is a very high priority. so i was pleased that president-elect biden has crafted a proposal and will call on congress to take up this important subject. i am studying the president elects proposal and i look forward to working together with him with the new administration and with my colleagues in congress to get comprehensive immigration reform signed into law. as i said, at the beginning of this talk, the next several months will be very, very busy and a very consequential period for the united states senate. let us begin our work in earnest. >> you're watching c-span your
1:33 am 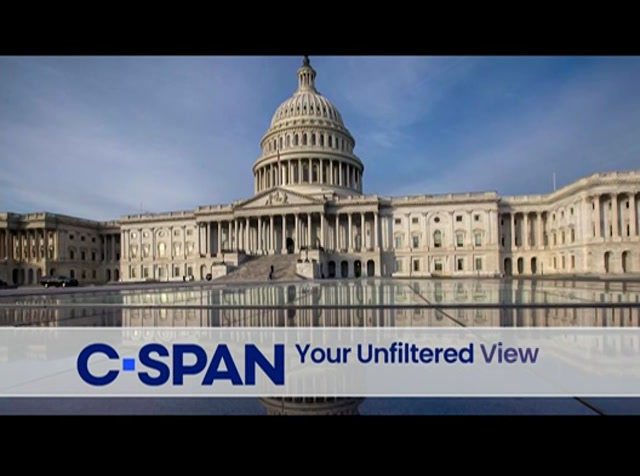 , unfiltered view of government. c-span was created by america's cable television company today -- in 1979. today we are brought to you by these television companies who provides c-span to viewers in the public service. >> look outside the u.s. capitol where in less than 24 hours, joe biden will be sworn in as the 46 president of the united states. unlike previous years, tomorrow's inauguration ceremony will occur without a large public gathering for security reasons. national guard bureau chief general daniel hawkinson and pentagon spokesperson jonathan hoffman held a briefing on the security preparations for the -- they also announced that 12 members of the national guard had been removed from their post following a recent vetting process.
left
right
disc Borrow a DVD of this show DVD
tv

Senate Minority Leader Schumer spoke about the January 6th attack on the U.S. Capitol and looked ahead to Joe Biden's inauguration and administration, and the impeachment trial of Donald Trump.