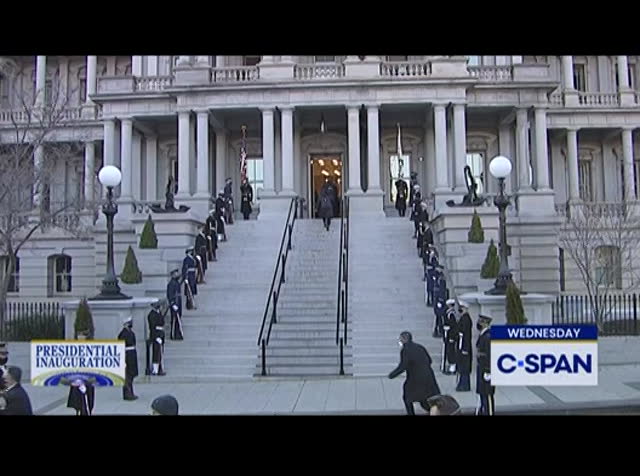 >> going to head back to -- >> inauguration day started with president trump's departure from the white house for a farewell ceremony in maryland. he told supporters waiting on the tarmac it has been an incredible four years and we'll be back in some form. after the brief ceremony, mr. trump and his family boarded air force 1 and flew to palm beach, florida.
10:21 pm 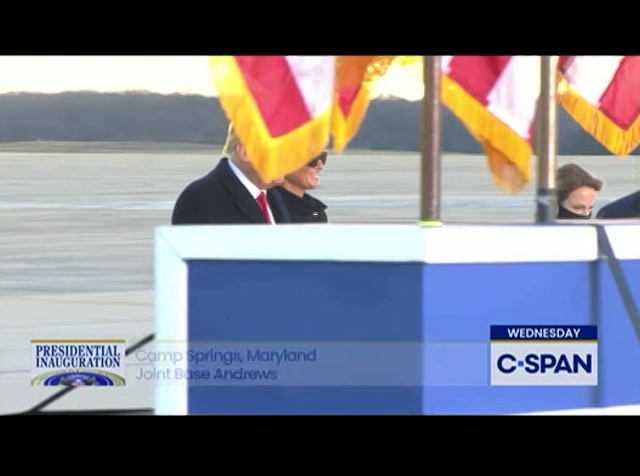 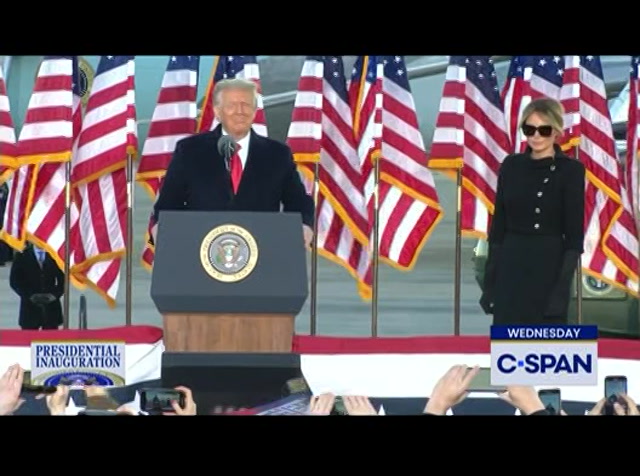 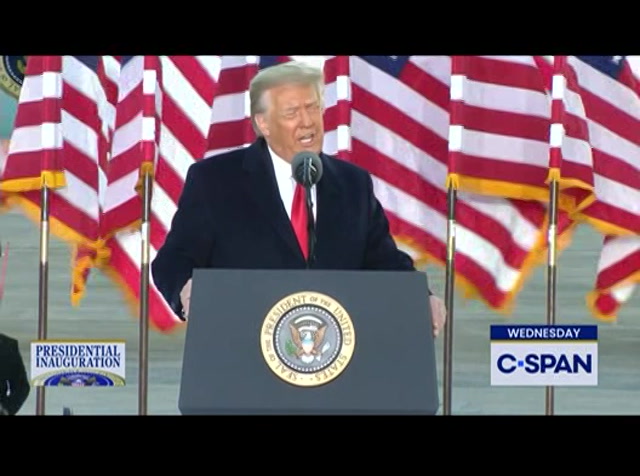 but it's been been something very special. we've accomplished a lot. our first lady has been a woman of great grace and beauty and dignity. crowd: thank you, melania.] president trump: and so popular with the people. so popular with the people. in fact, honey, would you like to say a few words? melania trump: being your first lady was my greatest honor. thank you for your love and your support. you will be in my thoughts and prayers. god bless you all. god bless your families, and god bless this beautiful nation. [applause] president trump: what else has to be said, right? but what we've done -- that's true, honey. great job. what we've done has been amazing by any standard. we rebuilt the united states military.
10:24 pm 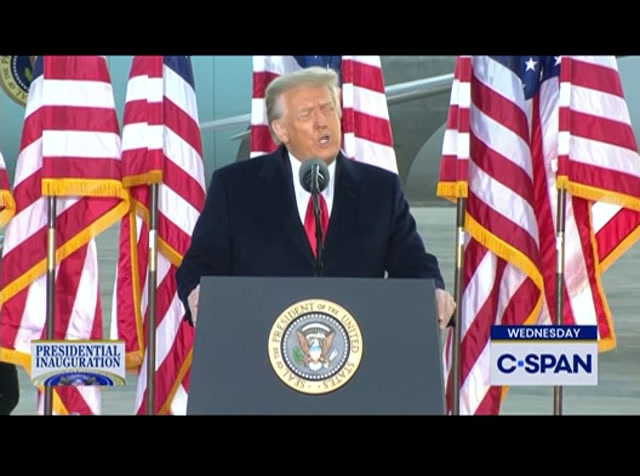 we created a new force called space force. that in itself would be a major achievement for a regular administration. we were not a regular administration. we took care of the vets, 91% approval rating. they've never had that before. the vets have given us, the va, the vets have given us an approval rating like has never been before. we took care of our vets, and our beautiful vets. they were very badly treated before we came along. and as you know, we get them great service and we pick up the bill, and they can go out and they can see a doctor if they have to wait long periods of time. we got it so that we can sadly get rid of people that don't treat our vets properly. we didn't have any of those rights before when i came on. so our vets are happy. our people are happy. our military is thrilled. we also got tax cuts, the largest tax cut and
10:25 pm 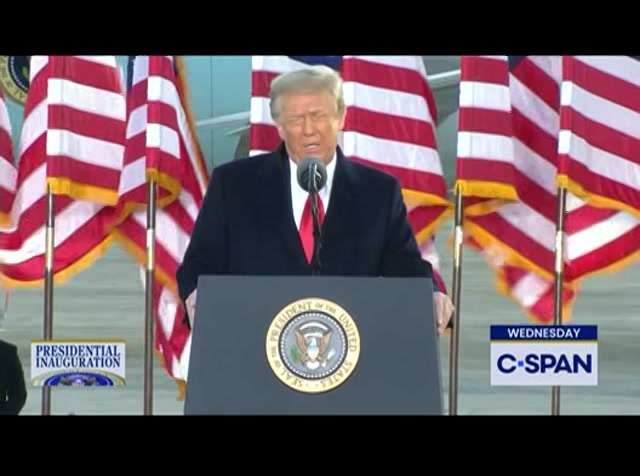 reform in the history of our country by far. [applause] i hope they don't raise your taxes, but if they do, i told you so. and if you look at the regulations, which i consider the regulation cuts to be maybe even more important, that's why we have such good and have had such good job numbers. and job numbers have been absolutely incredible. when we started, had we not been hit by the pandemic, we would have had numbers that would never have been seen. already, our numbers are the best ever. if you look at what happened until february a year ago, our numbers were at a level that nobody had ever seen before. and even now, we really built it twice. we got hit. nobody blames us for that. the whole world got hit, and then we built it again. and now the stock market is actually substantially higher than it was at its higher point prior to the pandemic. so it's a really, you could say
10:26 pm 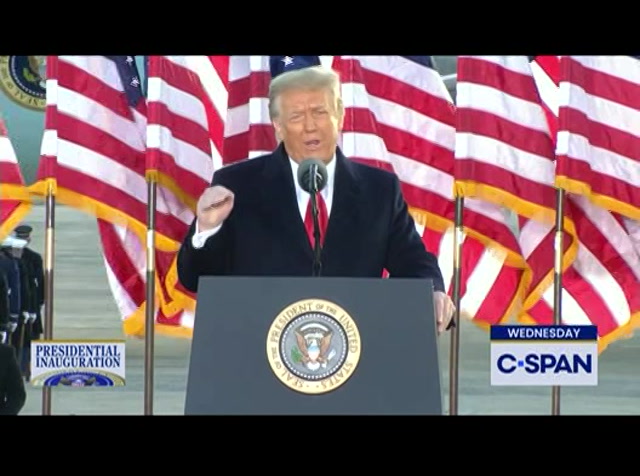 we built it twice. and you're going to see incredible numbers start coming in, if everything is sort of left alone. be careful. very complex. be careful, but you're going to see some incredible things happening. and remember us when you see these things happening, if you would. remember us because i'm looking at elements of our economy that are set to be a rocket ship up. it's a rocket ship up. we have the greatest country in the world. we have the greatest economy in the world. and as bad as the pandemic was, we were hit so hard just like the entire world was hit so hard. places that thought they got away with it, didn't get away with it. they're suffering right now.
10:27 pm 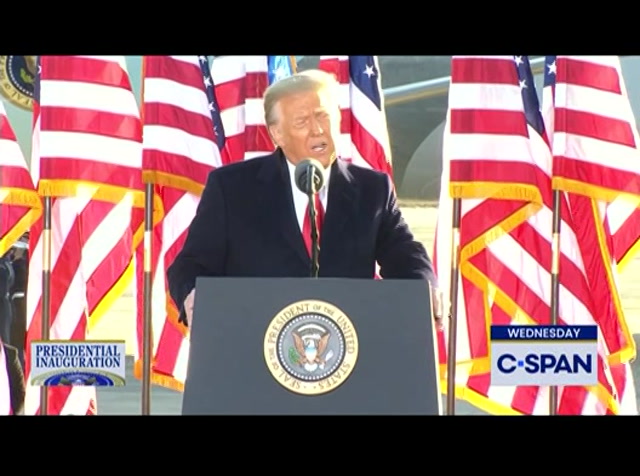 we did something that is a really considered a medical miracle. they're calling it a miracle. and that was the vaccine. we got the vaccine developed in nine months instead of nine years, or five years, or 10 years, or a long time. it was supposed to take a long time, many, many years to develop a vaccine. we have two out, we have another one coming almost immediately, and it really is a great achievement. so you should start to see really good numbers over the next few months. i think you're going to see those numbers really skyrocket downward. and i can only say this. we have worked hard. we've left it all, as the athletes would say, we've left it all on the field. we don't have to come and say -- we'll never say in a month, when we're sitting in florida, we're not going to be looking at each other and saying, "you know, if we only worked a little bit harder." you can't work harder. and we had a lot of obstacles, and we went through the obstacles and we just got 75
10:28 pm 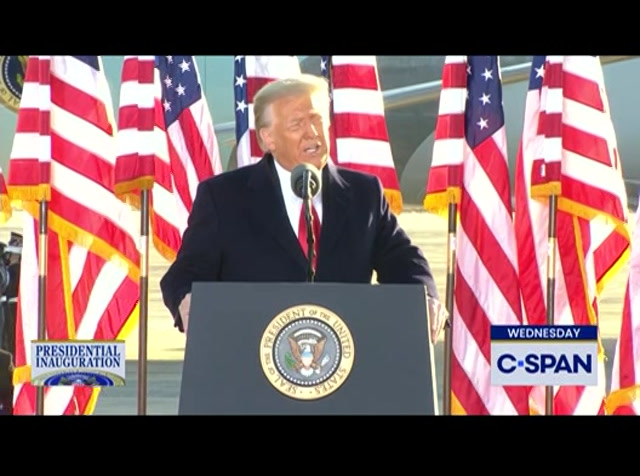 million votes. and that's a record in the history of sitting presidents. [applause] that's an all time record by a lot, by many millions, in the history of sitting presidents. it's been really just an honor. and one of the things we're very, very proud of is the selection of almost 300 federal judges and three great supreme court justices. that's a very big number. that's a record setting number. and so we've done a lot, and there's still things to do. the first thing we have to do is pay our respects and our love to the incredible people and families who've suffered so gravely from the china virus. it's a horrible thing that was put onto the world. we all know where it came from, but it's a horrible, horrible thing. so be very careful, be very, very careful.
10:29 pm 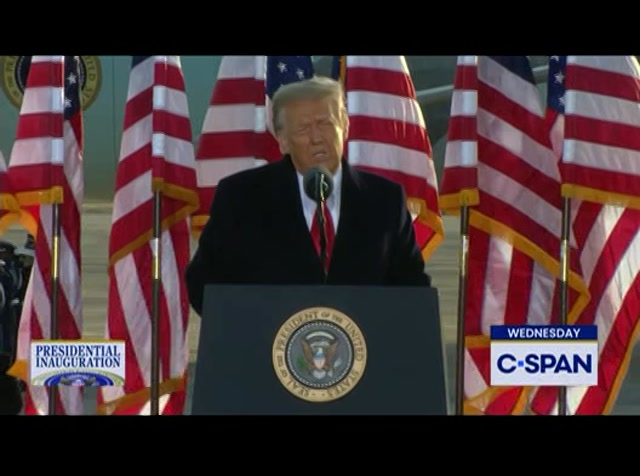 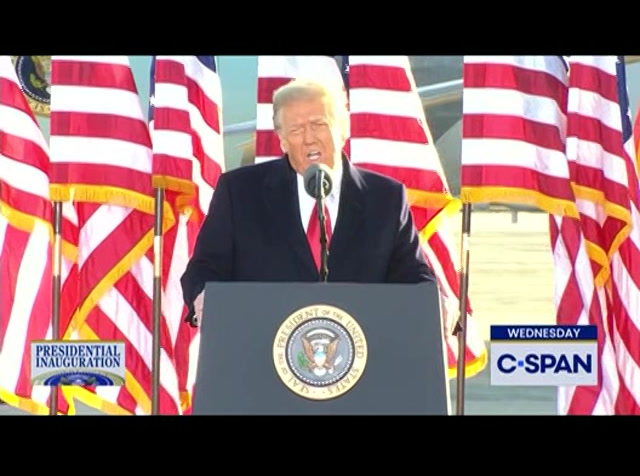 i will be listening. and i will tell you that the future of this country has never been better. i wish the new administration great luck and great success. i think they'll have great success. they have the foundation to do something really spectacular. and again, we put it in a position like it's never been before, despite the worst plague to hit, since i guess you'd say 1917, over a hundred years ago. and despite that, despite that, the things that we've done have been just incredible and i couldn't have done it without you. so just a goodbye. we love you. we will be back in some form. [applause]
10:31 pm 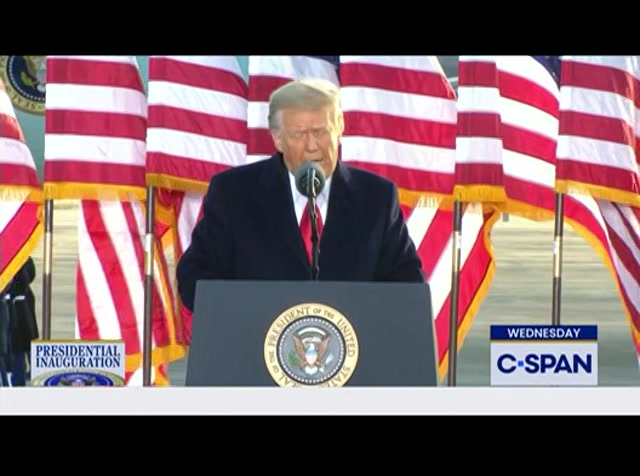 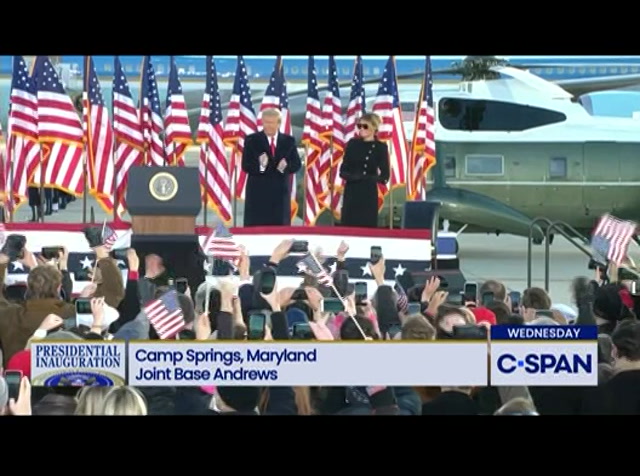 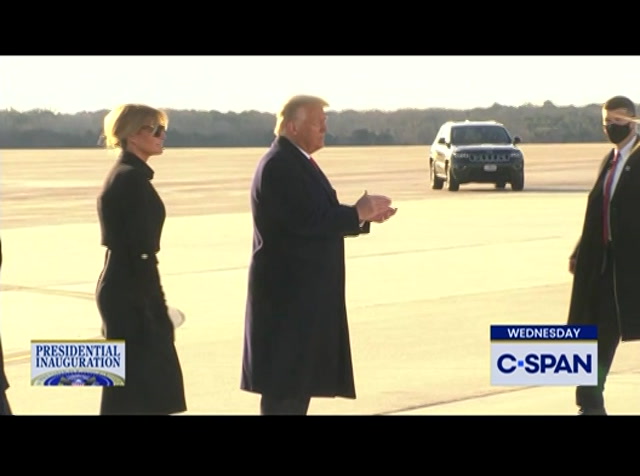 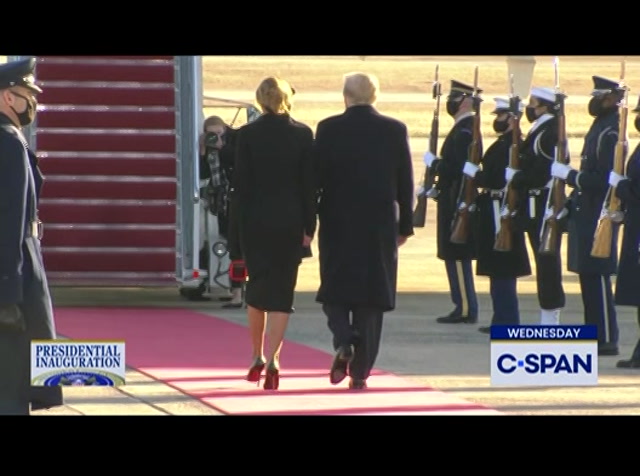 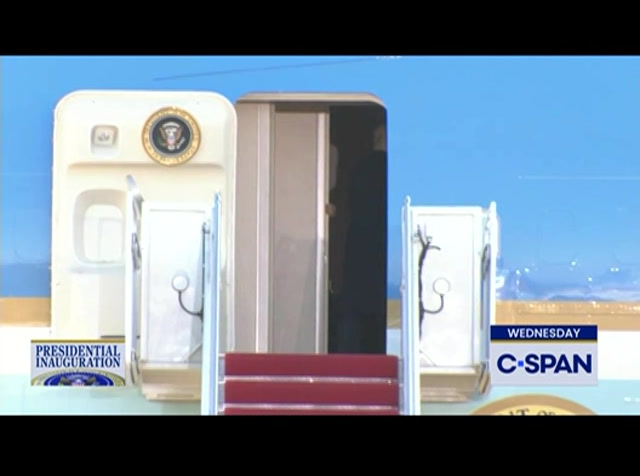 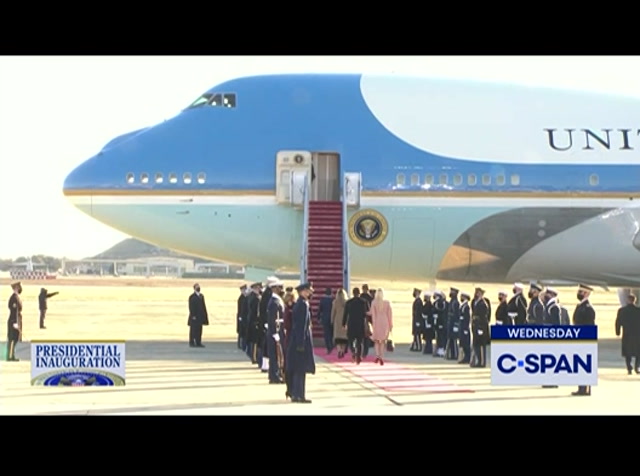 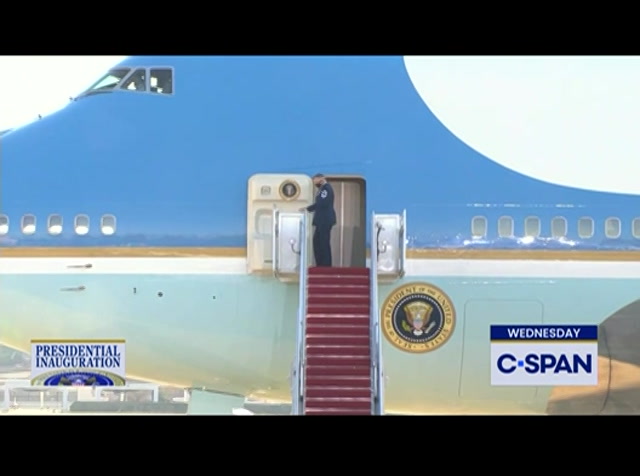 >> ♪ i did it my way what has begun if not himself 1 to say the things he truly feels for the record shows i took the blows and did it my way
10:38 pm 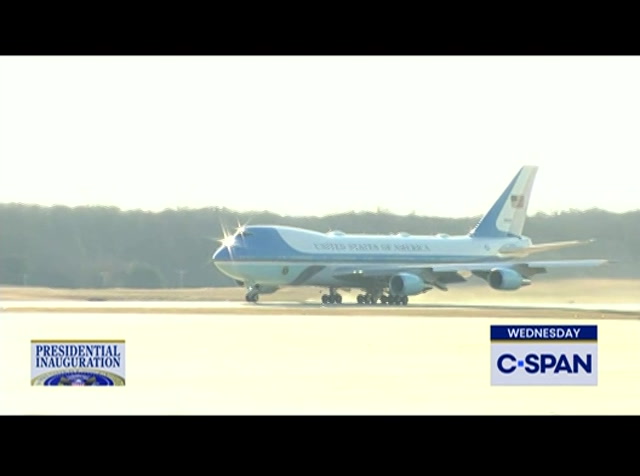 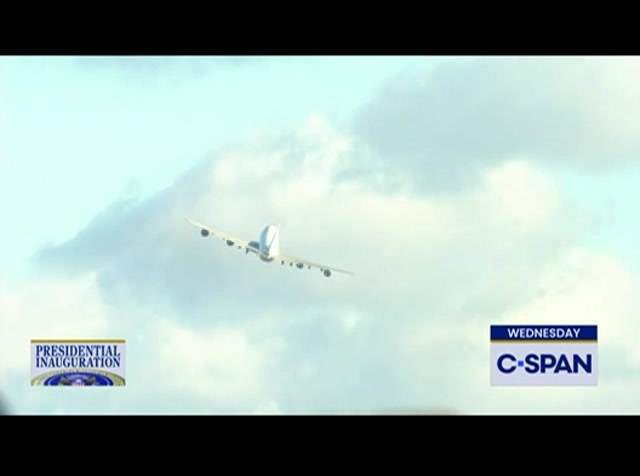 announcer: you're watching c-span. your unfiltered view of government. c-span was created by america's television cable companies in 1979. today we're brought to you by these igs television companies who brought to you c-span as a public service. ♪ c-span's washington journal every day we're taking your calls live on the air, on the news of the day and discussing
10:40 pm 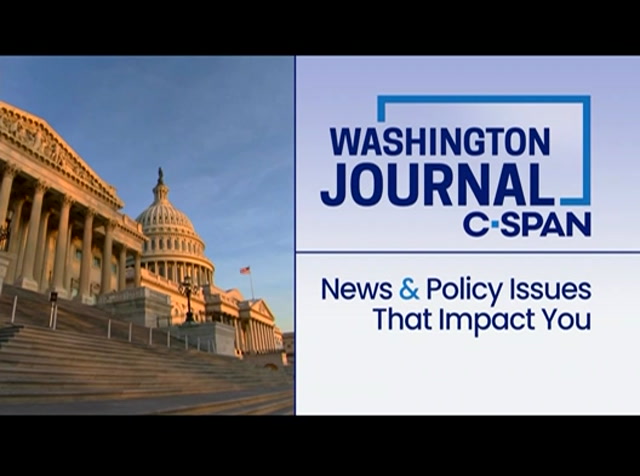 policy issues that impact you. coming up sunday morning, american enterprise institute senior fellow previews the biden administration's policies and challenges. and then former acting cdc director in the bioof bama administration discusss the biden's plans to combat the covid pandemic. be sure to join the discussion with your phone calls, facebook comments, text messages and tweets. >> we're back with american university of history professor alan lichtman who is here to talk to us about the perks presidents get once they leave office. good morning. it's great to be h you. host: many of us know professor lichtman
left
right
disc Borrow a DVD of this show DVD
tv

President Trump delivered remarks at his farewell ceremony at Joint Base Andrews in Maryland. He told supporters that it's been "an incredible four years, and "we will back in some form." The ceremony featured a 21-gun salute and a military band playing "Hail to the Chief." The president, first lady and family departed on Air Force One to Mar-a-Largo, Florida.