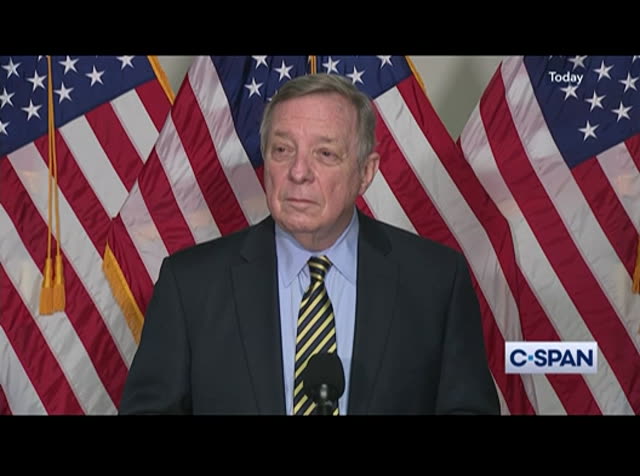 character and integrity. >> as for being chairman but also being the whip of your conference, we know neera tanden is going to face a difficult vote potentially later this week. do you think you are going to have any republican support on that? senator durbin: i don't know the answer to that. clearly, senator manchin's public statement makes this a challenge. we need to find support on the republican side of the aisle to make up for that vote the other way. ok, thanks. >> we will be taking this off. >> what do you think of garland as the nominee? do you expect that he will have bipartisan support? senator hawley: i don't know the
1:33 am 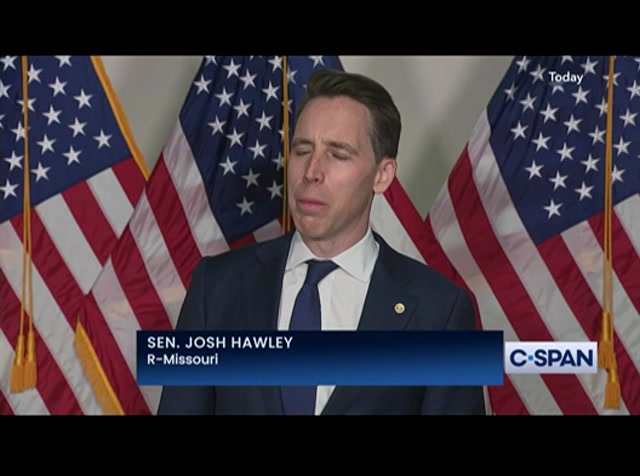 answer to that second question. i've been surprised at how many questions judge garland has declined to answer repeatedly, over and over and over. i think that's a little surprising. he was just asked again about john durham and the report and about his work, will he commit like bill barr did to not interrupting that? he will not commit to that. he said, i don't think it will be interrupted but i don't know. i need to look. i mean, judge garland is a very capable individual and he's giving himself deliberately lots of room. i asked him about illegal entry, the border. what he commit to keeping that a crime? she wouldn't. he -- he wouldn't. she's under really intense pressure from progressives and he's a seating to that. i think frankly, it leaves lots and lots of questions other. >> particularly on investigations, so your may
1:34 am 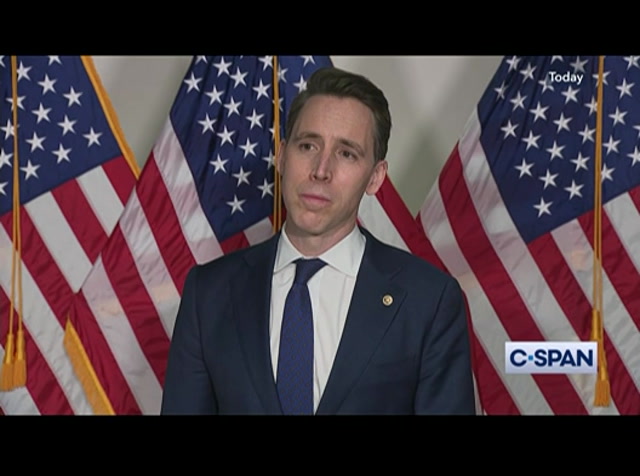 concern would be ending trump era investigations and then not picking up ones into the biden issue? senator hawley: i am interested in lots of things. i am interested in our laws at the borders being enforced. he would not commit to that. that i think is a major problem. i asked him if you would prosecute illegal entry, he would not necessarily commit to that. he said he was not sure what the current status was. i asked him about the efforts to fight the wave of violent crime, he did not have a response to that. i asked him about the google issue and antitrust and his answer was that he needed to review the case, he was not really up to speed about that. he committed to me that -- would not be the head of the enter test committee -- head of the antitrust committee. >> just talk about some of
1:35 am 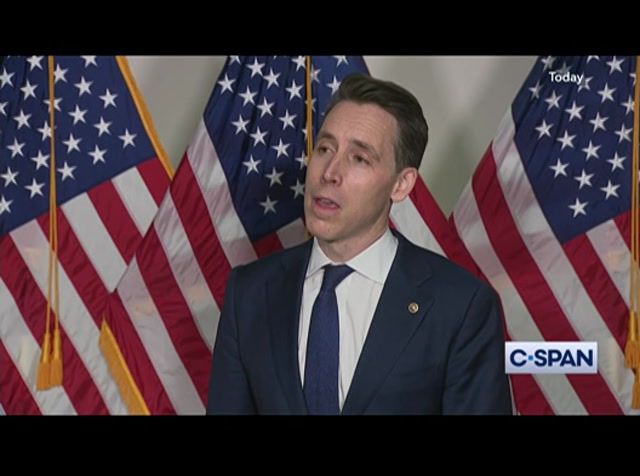 merrick garland's views when it came to some of the violence going on in portland and the response. he described some of the violence that happened here at the capital and he compared to the oklahoma city bombing. senator hawley: i asked him about violence at federal facilities elsewhere, whether it's portland, seattle, the white house, does that count as domestic terrorism? he has said that the capitol attack counted as domestic terrorism. i thought his answer was interesting. he said it might. i've use this, i don't care -- my view is this, i don't care what label you would on it, violent crime are to be prosecuted across the board. he was not necessarily entirely clear on that. he did say two other senators who asked him about this, are you going to prosecute those who try to occupy the federal courthouse and in portland, are
1:36 am 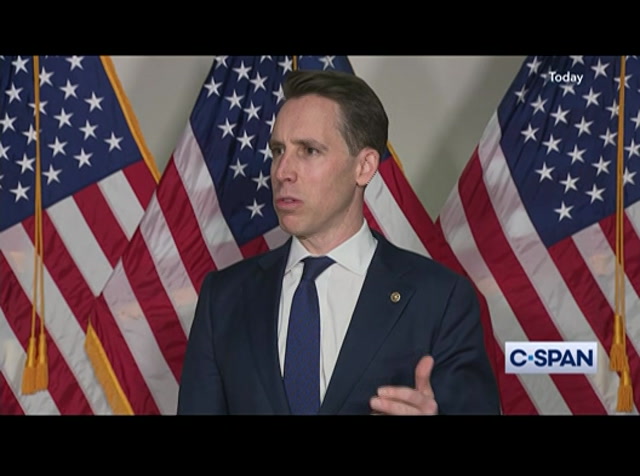 you going to prosecute those who try to riot at the white house earlier this summer. he gave i think a.s.. senator graham -- a yes. senator graham asked him about that. it was a tentative. yes i am looking for a firm yes. you are going to get prosecuted, whether it's here, portland, st. louis, i don't care where it is, you are going to be prosecuted. >> is there something you want to see from a nominee? senator hawley: i am to ask him some questions. i am going to give him a chance to answer some of these questions. i have not made up my mind yet but i will review his record and we will see. >> thank you so much, senator hawley. senator hawley: i won't be supportive. >> thank you, sir. >> day two of merrick garland's
1:37 am 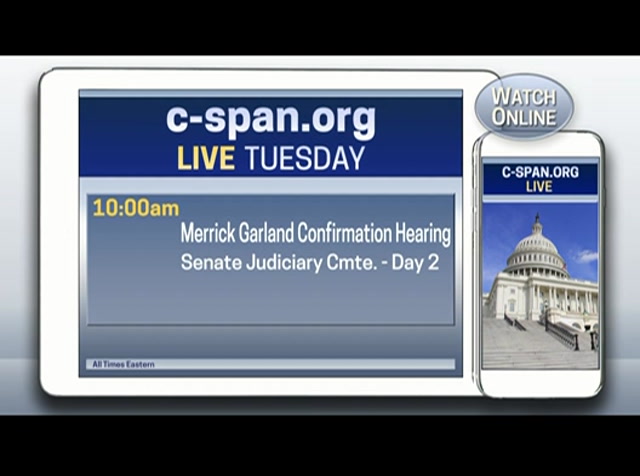 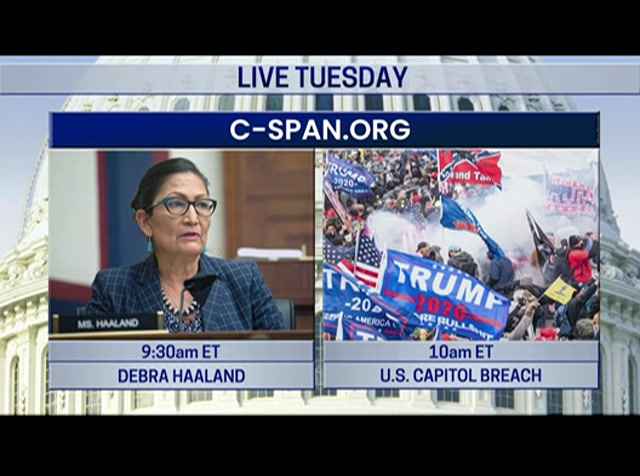 to investigate the security failures that led to the capital breach on january 6. watch live coverage on c-span, c-span2, c-span3, and c-span.org, or listen on the c-span radio app. >> earlier today, president biden spoke about the u.s. surpassing 500,000 deaths due to the coronavirus pandemic. he noted that the death toll surpasses u.s. deaths in world war i, world war ii, and the vietnam war combined.
left
right
disc Borrow a DVD of this show DVD
tv