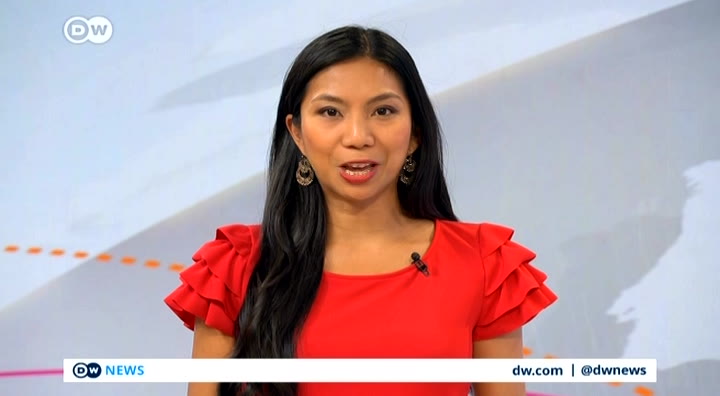 welcome to the business i'm to nelda mullen in berlin today many in germany are looking to china wondering how they did it because while the capital berlin is still waiting for its new airport to get off the ground a full 13 years after construction started and 8 years behind schedule china's president xi jinping officially launched a glitzy new mega airport around 50 kilometers south of the capital beijing today and it took just 4 years and outward demonstration of might amid a difficult time within the country. shaped like a giant starfish beijing dossing international airport took just 4 years to build and cost $60000000000.00 euros it's already the world's largest single airport terminal building it's going to be one of the busiest president xi jinping cut the ribbon on the bus terminal the launch comes just ahead of the 70th anniversary of the people's republic of china a mass of days in the ruling communist party's calendar why should. i
3:46 pm 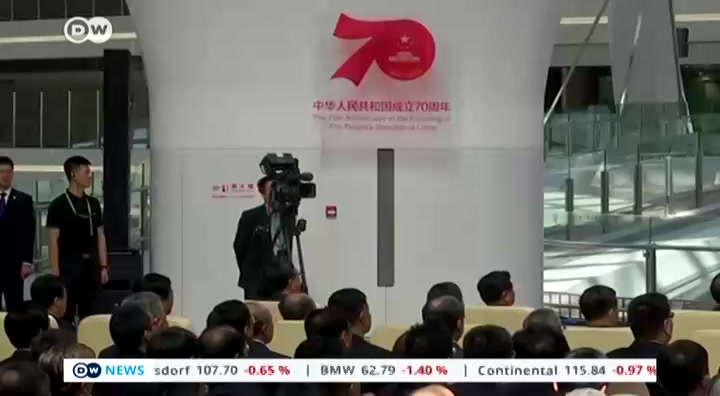 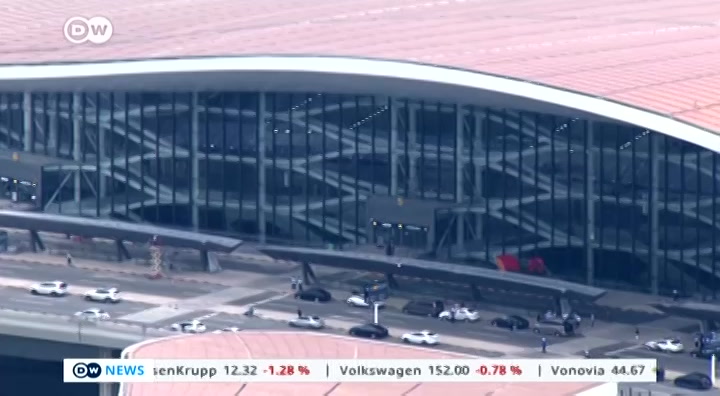 elsewhere ask questions about the future of mass air transition china's aviation future is just taking off. the china u.s. trade war has dampened economic prospects in asia with the asian development bank downgrading its growth forecasts for this year and next the bank scaled down its predictions from 5.7 to 5.4 percent this year and down a fraction next year to the woomera forecasts reflect clear fears that the us china trade standoff could escalate or even spread to other countries in the region for more i'm joined by yes the u.k. sawada chief economist of the asian development bank mr thought it welcomed now 5.4 percent growth in the region they still really good by most measures but the euro zone in contrast for example is projected to post just 1 point one percent growth this year how worried should governments really be. so actually as you said the
3:48 pm 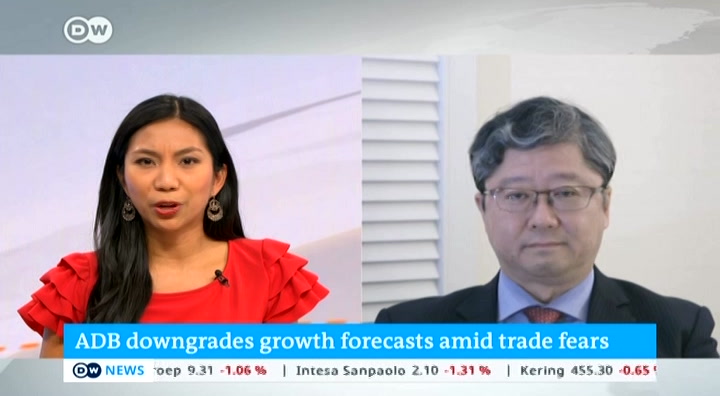 5.4 percent growth is quite robust if we exclude already high income in asia and korea i picture in china and singapore growth rate overall growth as high as 6 percent and 6 percent if economy continues this growth over 12 years it will make a size will be doubled so i think 6 percent or even 5.4 percent is still very robust so in that sense. overall it was meant for the government as a center bank also it is being going very well having said this in addition to the truck that the u.s. china trade tension over all groups global growth slowdown and also done was to make sense and conduct production cycle these are the main element why we don't want to buy slower growth forecasts
3:49 pm 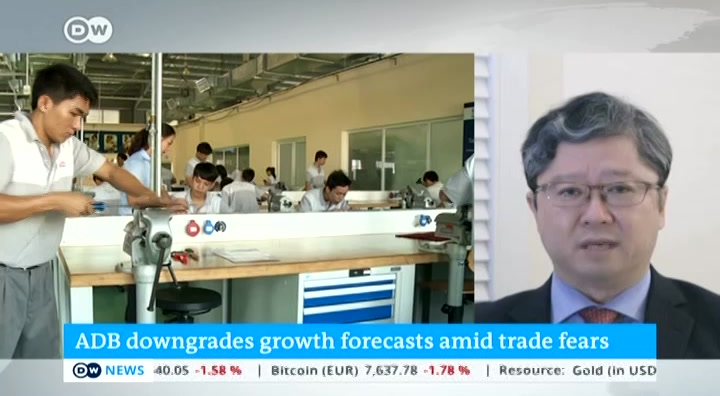 a lot of downside risk for them but what are some of the challenges that you see for the region in terms of guarding itself against the effects of these ongoing trade tensions so going to ensure there are multiple channels affecting asia economies in addition to indirect effect chinese or gross exposed will generate a negative impact on. other asian countries grows to do separate chain group about 10 network but the same time it was so done with china to the u.s. will create the opportunity through shifting export from china to other asian economies so you're at the top these opportunities i think it's very important to strengthen capacity of production expansion other also absorptive capacity of 40 direct investment. now you mention the opportunities that china's trade issues have for other countries within the region where that able to move into the space and
3:50 pm 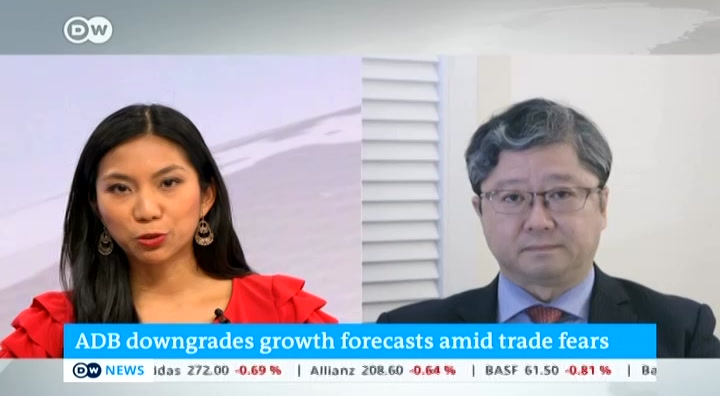 export more does that mean then that the trade war does produce some winners. not necessarily i think overall. chinese or gross road different return as directly affected however. across the board i think overall asia call me dumb potentially again through this shifting export from china to other asian economies so this is a typical country gaining a lot from trade shifting and also that comments like a bomber there seems to be gaining by expanding our government products on the perot exports to the u.s. market thank you very much iasi u.k. so what are their chief economist of the asian development thanks for your insights thank you very much now to some of the other global business stories making news.
3:51 pm 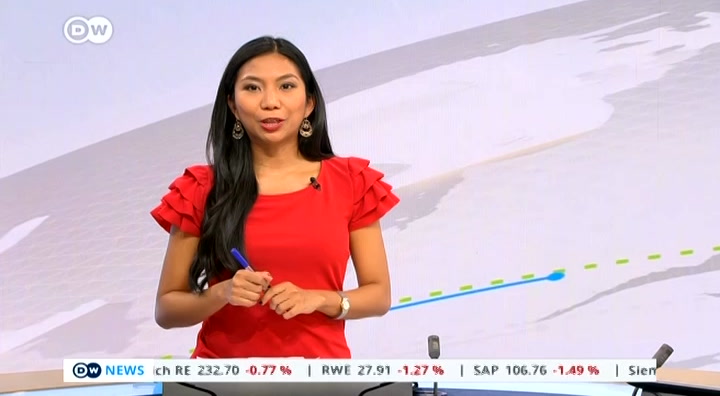 the former head of the bank and a stone. has been found dead initial reports point to suicide it was part of the ongoing investigation into an alleged money laundering scheme and investigators allege that don's got funneled some 200000000000 euros in illicit funds through its tiniest tony and branch during re is 10 year. the german subsidiary of thomas cook has filed for insolvency following the collapse of its parent company earlier this week 140000 holidaymakers are currently traveling with the firm and other local affiliates it is unclear how many customers will be affected. by the advisory board of germany's to some group has called 1st see care cost to step down after just one year the engineering and looks to revive its fortunes after cutting profit forecasts dropped off the dax earlier this month. germany has had its
3:52 pm 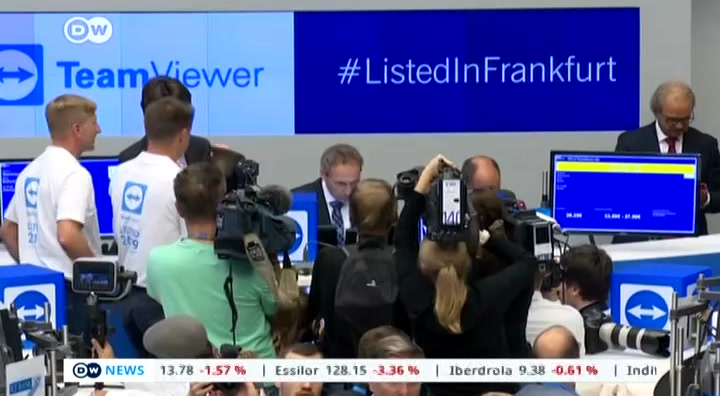 biggest tech i.p.o. in 2 decades. which makes a video conferencing and remote working software went public in frankfurt earning investors billions in the process the company raised over 2200000000 euros. time to check in with early boards and frankfurt early now team of you are hardly a household name there how did the public offering go. well the terms of the share price didn't go all that well the share price came in a. little bit lower than the offering price of 26 year old $25.00 and it continues to slide and it's trading lower now so not a very warm reception here but people put that up to the ambitious pricing. and viewer has recently started making profits and it's growing hugely but it still was a price that many investors apparently thought was just
3:53 pm 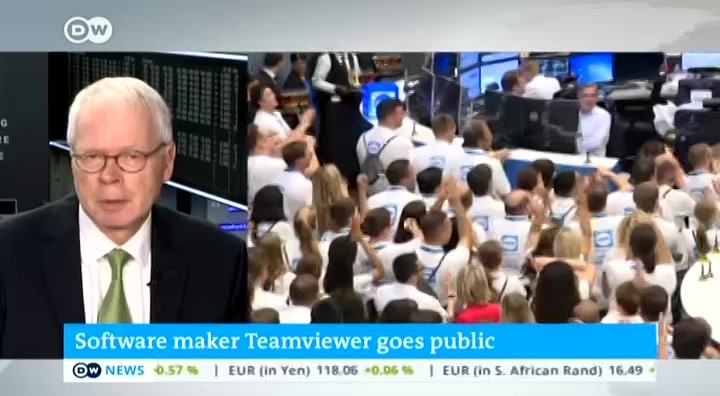 a little too high the atmosphere there was as enthusiastic as i i don't know if i've ever seen that team viewer but almost half its staff i would hear 300 people down on the floor ringing little bells accompanying the big bell ringing on the podium by the big shots quite an atmosphere here in the morning when that took place. the i.p.o. if not necessarily a very successful one but turning back to the earlier story about to syncro c.e.o. being asked to leave can you tell us what exactly is going on there. i know i can't i can only surmise what went on copas been going downhill for years and it's recently dropped out of the docks because it just didn't have the market value anymore and you know count of has been on board for years he was the finance chief before becoming c all last year and since becoming c o the situation has not become better there's been
3:54 pm 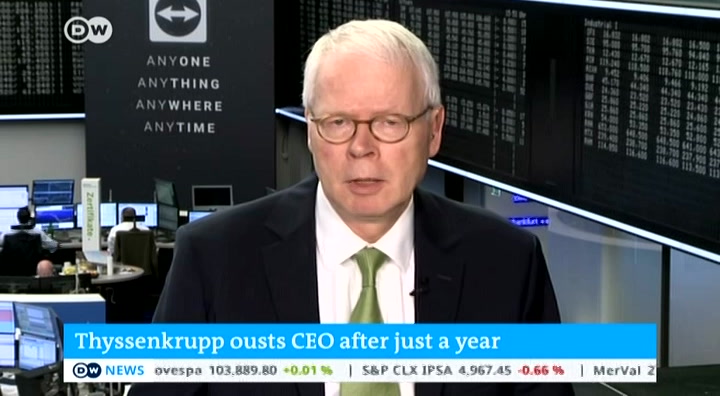 a strategy going away from still then when the e.u. forbid a merger it went back into still proclaim proclaiming it's a key business there's uncertainty about the elevator division and now the supervisory board chairman is going to take over in the interim while the company looks for a new more suitable candidate arguably a poison chalice anyway only barter there in frankfurt for us thank you very much. a british exit from the e.u. without a deal is looking more likely by the day a nobel prize that can turn the french part of cali into a major choke point to prevent this france has introduced a new border system and it was comprehensively tested for the 1st time have a look. there are no long lines to be seen here at the dress rehearsal for a no deal brecht's that france has prepared itself for the emergency with a new digital border system. of their brags it will have to reintroduce border
3:55 pm 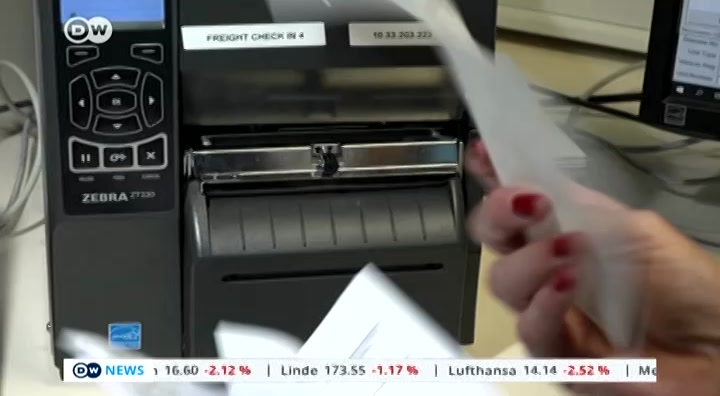 checks even if the e.u. and britain don't impose customs duties exporters and importers will have to fill out forms again you can use our system to do that online in advance human calais they just scan in the barcode and continue on their journey though some. only certain items like food will be physically examined at the border hundreds of border guards are getting ready not only do they intend to prevent waiting times they also hope to cushion the adverse effects of brecht's that after all kalai is the main hub for trade between the e.u. and britain. of course we know that a future tariffs are imposed on our business could suffer here especially of companies started exporting or importing less between the e.u. and britain really ubiquity meek. little but we've made it our business to be prepared. and we are even for
3:56 pm 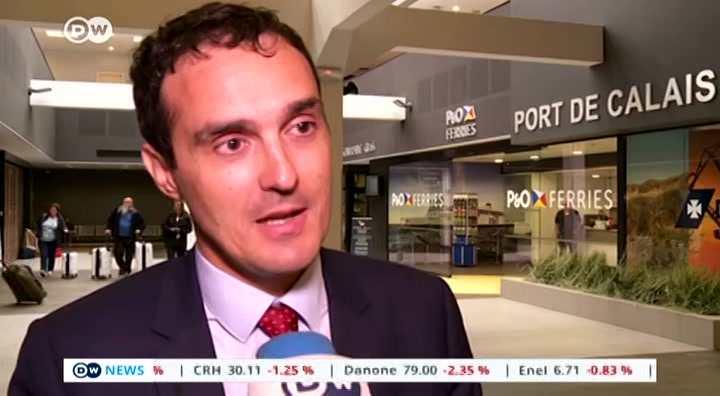 a no deal breakers it makes it but it's still up in the air if the new border system will actually go into effect at the end of october. that's it for me and the business team here and berlin for more business news and features check out the view w dot com slash business or follow us on facebook and on twitter i'm john el-gamal not in berlin thank you very much for watching.
3:57 pm 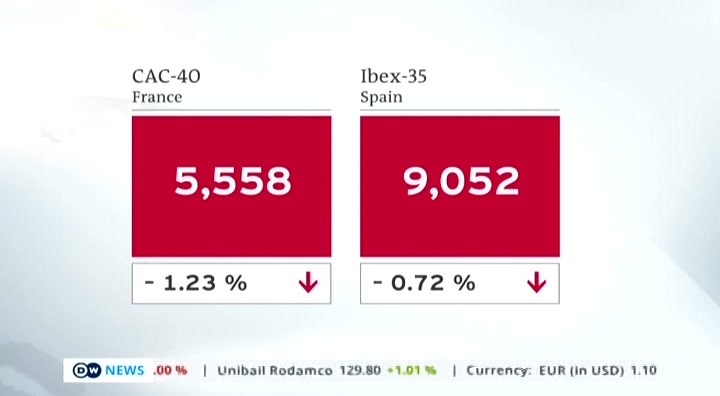 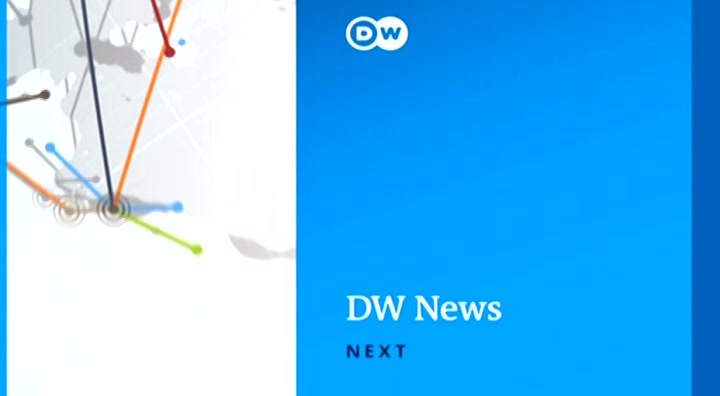 accommodation. which is fine from enough. to 100 your 1st limerick. last one of a sentence where the winners of the live security in the us is becoming a scarce commodity led in germany he lives illo. where is home. when your family scattered across the globe. to listen to. the journey back to the roots get minutely. to shush family from somalia live around the world. one of them needed urgent assistance. the family starts october on t.w. . the world unto itself.
3:59 pm 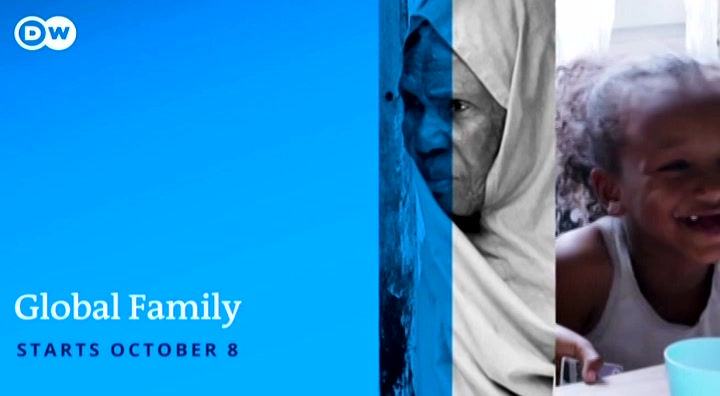 with its own gravitational pull down. the finest musical compositions. with some histories. don't believe that he was into them don't tell me that there seem never. and the joint should come up in the morning. reveal the symphony of the hottest palm. how did the romantic master come up with such a passage. the brahms code. the tober 11th on d w 5 enough. play
4:00 pm 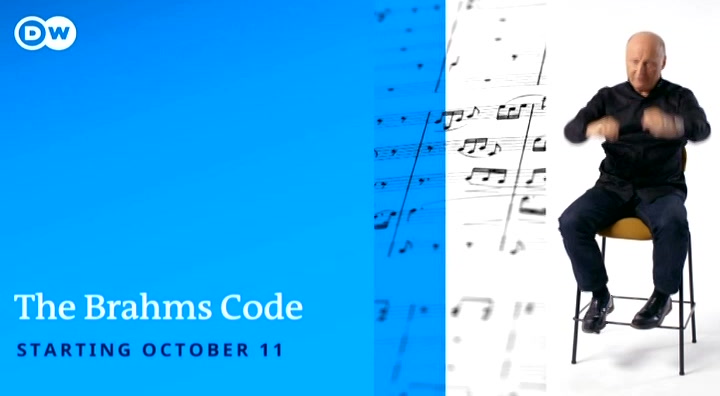 . this is the wus coming to you live from. it's back to business fall of one presumes in london the prime minister suspended it but the supreme court overruled him now lawmakers are ready to question boris johnson on his next move and the brakes a crisis pretty good line to london. also coming up egypt of widens its crackdown on anti-government protests his fear is over and over a 1000 people have been arrested since protests is off to last week and is sponsored by rats public display of just.
left
right
disc Borrow a DVD of this show DVD
tv